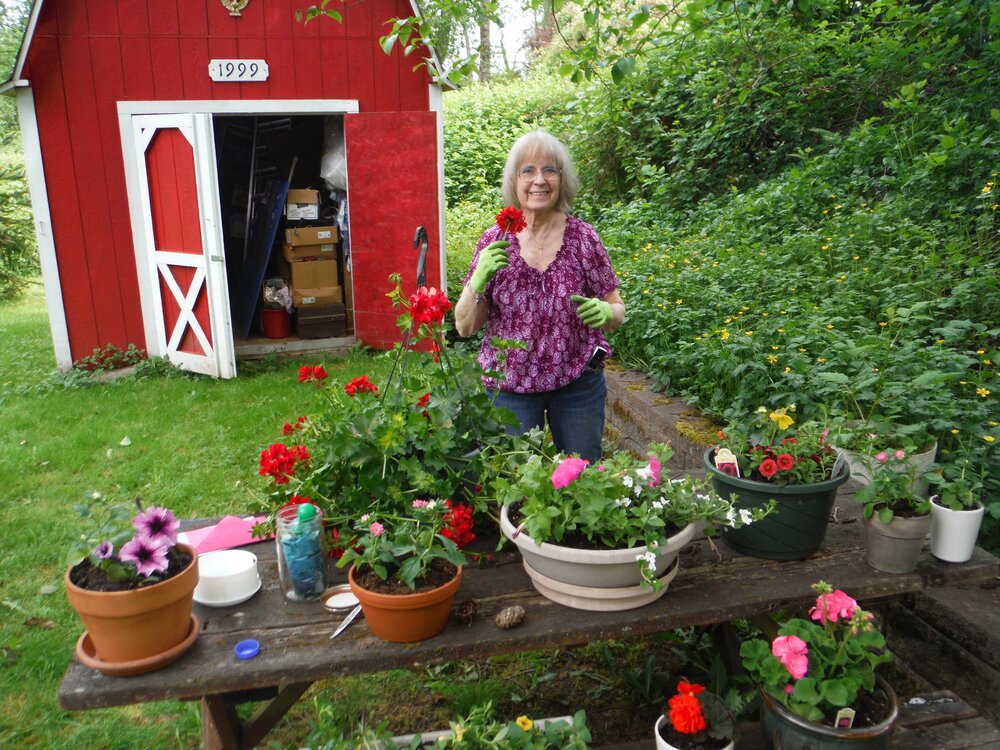 Nancy was born in Clarion, Iowa October 25, 1938, the second of five children born to Vernon Garney Hargan and Olive Lucile Tourtelotte. The family lived in Clarion until 1945 when they moved to Alaska, where Vernon was a civilian working for the U.S. Air Force as a jet mechanic.

The family settled in Mountain View, a suburb of Anchorage just a short distance from Elmendorf, Air Force Base where Vernon worked.

In 1954 Vernon was diagnosed with terminal cancer and died in early 1955. Nancy was an "A" student in school, a young Christian girl, and regular church attendee. Nancy was also an accomplished pianist. When she was 16 she got a job as an usher at the Empress Theater in Anchorage.

Nancy was a quiet young lady who was studious and serious about helping her widowed mother run the household and tending to the two youngest, Laurel and Anthony.

In June 1955 she and her brother Charles were riding their bikes and saw the first tented circus ever to travel to the Alaska Territory. They took refuge in a wild animal show tent to get out of a heavy rain. There she met Donald J. Moyer (Donn), who owned the animal show. They started dating and four months later eloped to Washington where they were married on October 27, two days after Nancy turned 17.

Their first child, Donn Thomas, was born 28 September in Anchorage. Their second son, Terrall Stephen, was born in Wenatchee, Washington on 20 December 1957. On 6 April 1959 in Wenatchee, Wendy Lucile was born. The family traveled frequently, mostly on the west coast, and had settled in Petaluma, California where Laurel Felice was born on October 26, 1960.

In the mid-1960's, the City of Petaluma, CA hired Nancy as its first female police officer and first uniformed “lady cop.” She was in charge of collecting the money from parking meters, giving out tickets for violators, as well as other police duties.

During that time the Moyers had a small carnival, adding a circus in 1967, with both units playing celebrations in the Bay area. Nancy managed much of the business. Later, they opened The Reptile Jungle and Zoo at Windsor, California.

When Donn took a managerial position programming a cable television station in California, Nancy went to work heading the commercial sales department and worked both behind and in front of the television cameras. They later reprised these roles in Tacoma, Washington.

Nancy was the booking agent and managed the show office when the family started another carnival in Washington. When they sold the carnival, they established an educational reptile show, traveling six western states over 15 years sharing knowledge and respect for reptiles.

Nancy was optimistic and persistent, always striving to find ways to get things done successfully. She took on many roles and reveled in being a certified tax consultant, taking great pleasure in helping people meet their income tax obligations — and not a penny more. She edited every page of the books Donn wrote on B-Western movies, and helped program their online radio station, KNLDJ-Moyer Radio, featuring old-time radio shows and music, with interesting interviews. These are just a few examples of Nancy’s myriad experiences. Whatever the adventure, Nancy embraced the challenges and strove for success, whether performing rola bola (balancing), magic, juggling, twirling a fire baton in their duo circus act, “The Embers,” or caring for and handling exotic animals and reptiles, Nancy was all in. Nancy's personal desire was always to help and better someone else’s life, especially our family.

Nancy had several health issues. When she was 26 she became a Type One "brittle" diabetic, a term describing an extremely delicate condition. Nancy balanced her diabetes and lived an active healthy life despite her diabetes and other conditions. Regardless of the illnesses and problems she encountered in life she made the best of it and stayed positive.

Donn and Nancy shared a wide range of adventures and travels, always together, living a lifetime of love together.

Nancy Moyer was a loving, kind, gentle, humble, soul who is greatly missed by all who knew her. May she rest in peace.

To send flowers to the family or plant a tree in memory of Nancy Moyer, please visit Tribute Store

Share Your Memory of
Nancy
Upload Your Memory View All Memories
Be the first to upload a memory!
Share A Memory
Send Flowers
Plant a Tree