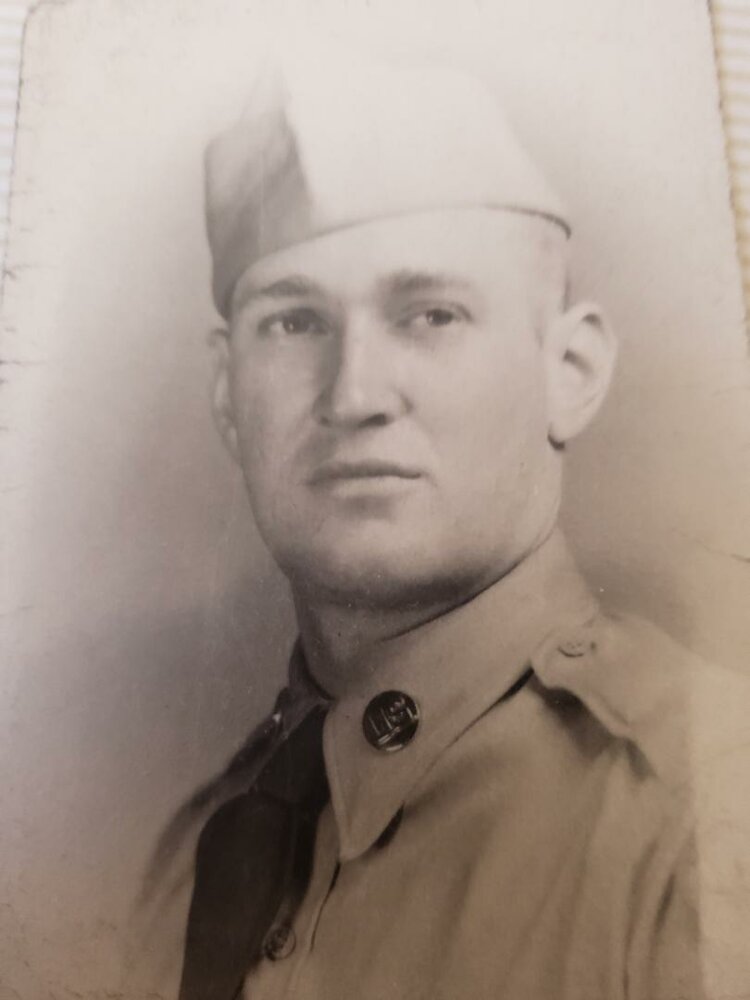 Wayne Edward Ellingson, 91, of Federal Way, WA passed away on August 5, 2022 after a long illness with altzheimers. Born on December 20, 1930 in Junius, SD, the second of four children born to Alfred and Foresta Ellingson, Wayne grew up on the family farm near Forestburg, SD. Here he helped raise registered herefords, chickens, other farm animals and crops. Farm life wasn’t always easy but he had a secret weapon, his imaginery ranch hand Johnny Pickle. As jobs came up that he didn’t want he would give them to Johnny Pickle to accomplish. After high school he worked a few jobs, including driving a dump truck along with his cousin Glen Jopp for Sutton Construction.  He also worked at fumigating grain bins through the AFC Office in Huron and gold mining in Lead, SD at the Homestake Mine. Money saved he spent on vehicles, including an Indian motorcycle. He would travel, including to Canada, a four day trip to Mexico with his cousin Glen and riding in the 1948 Sturgis Bike Rally alongside his older brother Gene. He and Gene spent some service time together and had lifelong nicknames for one another, naming themselves after two colorful town drunks. During his military service he also got nicknamed “Duke” due to the popularity of Duke Ellington at the time. Vehicle repair skills helped as he was stationed in South Korea driving jeeps around, moving officers, other dignitaries and supplies. During his service he also spent time in Washington State and gained an appreciation for Washington and the Pacific Northwest. Wayne married Marie Maxine Kopke from Wessington Springs, SD on April 3, 1954 after completing his US Army service. He had corresponded with Marie during his military service (letters closely guarded by Marie, which neither her sisters or daughters could ever find.) After the wedding they resided on his family farm in a small two room house on the property, complete with an outhouse. Their daughter, Cristy Lea, was born in June of 1955. Wayne agreed to help his father with the crops that year, after which the young couple moved to Washington State with their infant daughter in search of employment. Wayne was hired at the Pennsalt Chemical plant (later renamed Pennwalt Chemical) on the Tacoma tideflats, which is where he worked for over 30 years. This was followed by some seasonal work at Lloyd Enterprises Milton pit working at the scalehouse and with the dozer. In the early 1960’s Wayne and Marie bought a boat, which was hauled home and rebuilt. During one outing winds caused the boat to bob around in Commencement Bay. They ended up waiting out the storm in the Point Defiance harbor, after which Marie asked that he sell the boat. A couple of women bought the boat and later called and thanked him for his outstanding job on the boat rebuild. A log boom ended up traveling over the boat, with them inside, causing them to bob up and down under the boom until it passed completely over them, after which the boat bobbed back to the surface with both surviving. Wayne enjoyed traveling and instilled that desire in each of his daughters. Time spent with family and outdoors, whether it included fishing, camping, hiking or photography, were appreciated. Coworkers gave him a 35mm camera for retirement, which he made great use of while on family outings, birdwatching, sightseeing and attending special events, including the tall ship parade in Commencement Bay. Wayne and Marie purchased their SW Federal Way home in 1964, using their car as partial downpayment. Here they raised Cristy and her younger sisters Donna Sue and Kay Linda. They lived here over 60 years and it where Marie became caregiver for Wayne as altzheimers spread, a disease fairly common in his maternal family. Cancer ended Marie’s life three years ago. Wayne’s last few years were spent in NE Tacoma at Harbor Ridge Adult Family Home, cared for by the family of Marina, Ben, Mary, Jamie and Mira. Dr. Kevlin Slingwine with Norvari Primary Care assisted with his medical care as well as members of Envision Hospice, esp nurse Anthony, his trainer Denise, social worker Lori and Greg Kammann, the hospice chaplain. The family wishes to truly thank these caregivers for all that they did to care for and enrich Wayne's later life. It is suggested any monetary donations be made to altzheimer’s research (https://act.alz.org/donate) or to Envision Hospice. Wayne is survived by his brother Arnold, sister-in-laws Cheri Ellingson, Mae Ellingson, and Kathryn Nord; brother in laws Glen Nord and Robert Blasius, his three daughters, son-in-law Eric, numerous grandchildren, great grandchildren, nieces and nephews. Per preplanned arrangements his cremains will be placed alongside Marie’s in a niche at the Tahoma National Cemetery in Kent/Maple Valley following an onsite military commital service and a subsequent gathering at Family Christian Church. Services will be held September 26th at the cemetery at 3pm. Arrangements are being handled by his daughters and Edwards Memorial.