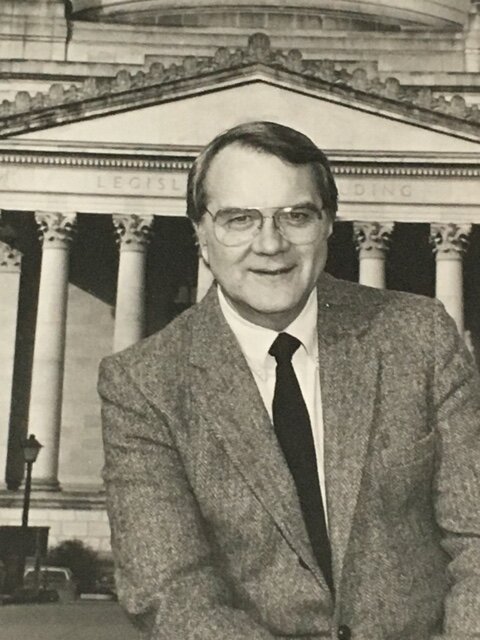 Kenneth Milton Madsen was born in Idaho Falls, ID on May 24, 1939 to Joseph and June Madsen.  The family moved to Spokane, WA, where Ken was raised. After high school Ken joined the army and was a distinguished Green Beret. It was an intense period in his life he seldom talked about afterward.

Ken lived in rural Roy for most of his life and represented the south Pierce County area as a devoted public official for years. He loved his farm, his cows, dogs and chickens. He was a big history buff and enjoyed vacationing in battlefield areas like Custers Last Stand and Normandy. He also liked western art and loved the Charles Russell museum.

Ken was just not any elected official. He had common sense, he listened to your story no matter who you were, advocated for responsible change and always had a good joke to tell.

Ken retired from public life in 2008 as the Pierce County Assessor Treasurer. He was elected to that position in 2001 by Pierce County voters. While in office Ken introduced a new computer system that revolutionized the effectiveness of the office and computer tablets in cars for efficient property assessments. He also streamlined all the office paper records into scanned computer documents.  He was a revolutionary in his thinking.

He served as a Pierce County Councilmember from 1992 to 2001 during a turbulent time in Pierce County with the implementation of mandated growth management planning.

Ken was preceding in death by his parents and his siblings, Victor A. Madsen and Janet Madsen Bardsley.  He leaves behind good friends and many nieces and nephews.

To honor Ken’s wishes there will be no services.  He will be interred in the Tahoma National Cemetery.

To honor Ken, donations in his name can be made to the Rosa Franklin legislative internship program. Ken loved teaching legislative pages and always had a college intern he tutored in government.