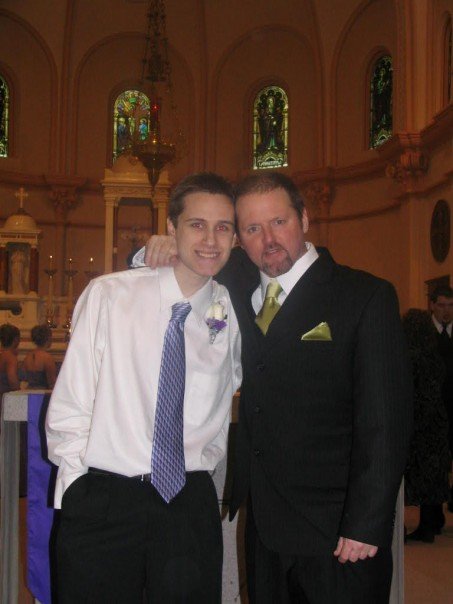 On April 5, 2021, at 840 AM after a 7-year battle with liver disease, David Robert DeBolt passed away peacefully in the loving arms of his fiancé, Johanna, in the home they shared in Lacey, WA.

He is survived by his son Shane DeBolt, sisters Maureen DeBolt and Jacquie Reeves. His fiancé Johanna, niece Dannielle Zierden, nephews Zak and Pat Taylor, Ben and Cooper Reeves, many great-nieces and nephews, his grandson, Bodhi, and extended family members and friends.

David was born May 1, 1965, in Tacoma WA to Robert DeBolt and Sara Sullivan, who preceded him in death. He grew up in the eastside of Tacoma. He graduated from Lincoln High School in 1983.

When he was a young boy, he spent his free time at the Eastside Boys Club, hanging with his friends, eating pizza from Spuds, and playing Basketball at McKinley Park.

David has always had a great love affair with sports, he played football, baseball, and basketball from an early age and all through school. He was even on a few basketball teams as an adult. He knew the stats of all the players even where they went to high school. From the moment he played his first round of golf it was love at first swing.

On March 14, 1987, David and his high school sweetheart, Allison, welcomed son Shane into the world. Shane was his pride and joy they were inseparable. In the late '80s, early 90's both father and son could be seen rockin’ acid-washed jeans and sporting matching mullets.

David worked at Church's Chicken in Tillicum as a teenager and when Church’s closed, he stayed on at the Taco Bell as an Assistant Manager. Another job he had lots of stories about was the Keg. For over 10 years David drove the bus for Pierce Transit.  He loved driving a bus and all of the different people he met on the job. The last job he had before he became ill was as a taxi dispatcher for Fort Lewis Taxi.

David loved all forms of music, from Peter Paul and Mary to Elton John, Johnny Cash, HipHop, and Rap. Rage Against the Machine and Earth Wind & Fire being among his favorites. He enjoyed reading and playing board games. Blackjack was his number one card game, and you could always find a stray card hidden up his sleeve.

David believed in family, he did everything with them from weekend barbeques, carpooling kids to school, a summer-long, cross country road trip with his dad and sisters. He always had a story to tell about the family vacations to Lake Cushman, where he had a love-hate relationship with the rope swing. He just couldn’t time it right and ended up landing hard on the rocks more times than not.

Being an uncle to his nieces and nephews was a job he took very seriously. Loving them a lot and treating them as he would his own. David had many nicknames over the years and the two that stuck with him for life were Double D and Uncle Break It. If he were to touch or attempt to fix something, it usually ended up broken. David was well-liked and had many close friends whom he considered to be family.

The Seattle SuperSonics was David’s team, and he was devastated when the team was sold and moved to Oklahoma. He had high hopes that Seattle would get a new basketball team someday.

Another thing David loved was Mount Rainier or "My Mountain" as he liked to say. His dad built a cabin up in Ashford for the family, where David spend a huge part of his life. David loved to laugh and make everyone around him laugh. Being quick with a joke and well known for his April Fool’s Day jokes and pranks. Even if you’ve fallen victim to him for these pranks, you all know it was too hard to stay mad at him. He was just that kind of guy everyone loved.

He met his beloved fiancé, Johanna in 2009, beginning a friendship that would later turn into love. In 2013 he moved to Olympia to live with Johanna and her children. They had a wonderful 9 years together. Sharing so much together from romantic getaways to concerts and just being happy at home. Loving each other fiercely and through that love, David had the opportunity to experience the joy of being a grandpa to Johanna’s grandson, Bodhi. His hope was to be able to see Bodhi go to his first day of kindergarten and teach him how to play ball.

In 2014 David was diagnosed with end-stage liver disease. With the love and support of Johanna, David was able to fight and stay strong for 7 years.

Although David may be gone physically from our lives, he is still here with each and every one of us, in the friendship and love that we shared with him and the memories that we have. He would not want us to dwell on the fact that he is gone but remembers all the good times they shared and to keep the memory of him alive through stories about him and living a good life. Knowing that he is up in heaven with Jesus and his family and that he is whole, once again, reborn with a new body and mind, and the knowledge that one day we will be reunited with him.

To send flowers to the family or plant a tree in memory of David DeBolt, please visit Tribute Store
Print
Share A Memory
Send Flowers