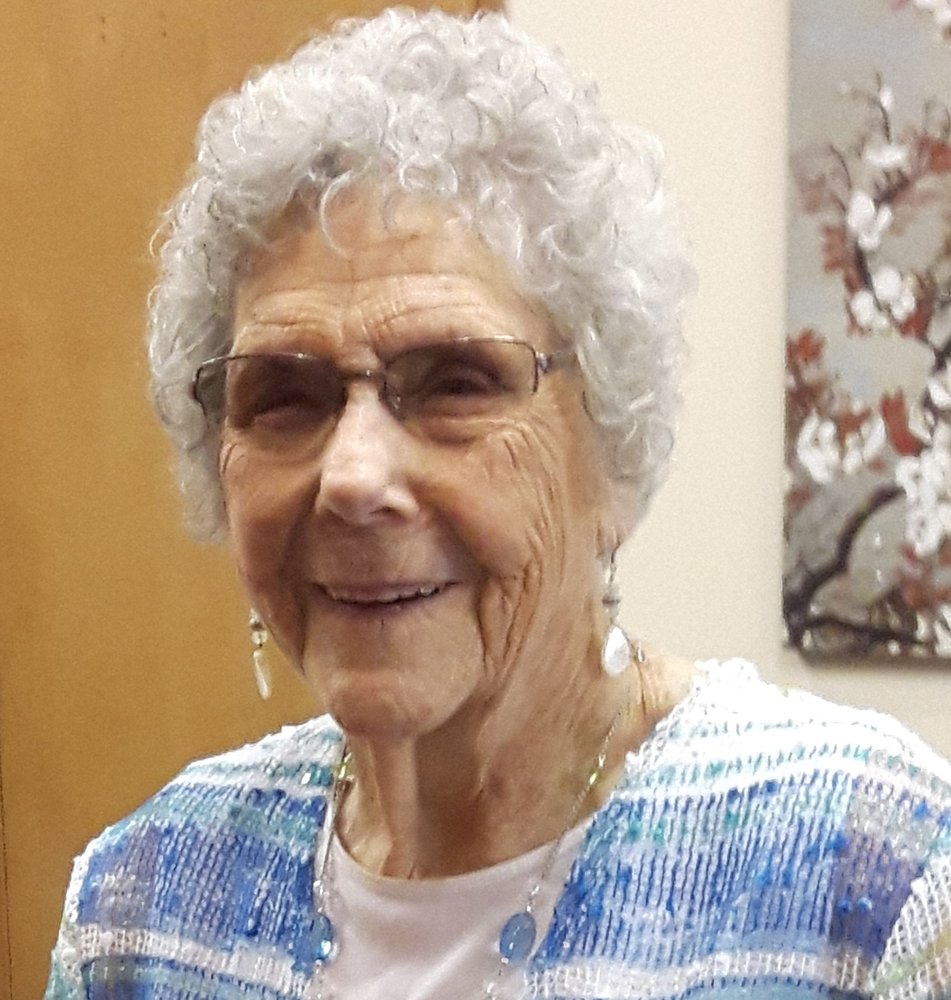 Thelma Mae (Gilson) Guerber passed away on March 24th following a lengthy battle with cancer. She was born at home on May 14, 1924, to Andrew Jackson and Alice Gilson in the rural community of Kings Valley, Oregon.  When she was 2 years old the family moved to Salem, Oregon, where her father worked buying and selling cattle.  When 8 years old she and her brother Jack rode their bikes down State Street in Salem in time to watch the rotunda of a burning original Oregon State Capital Building collapse.  A year later the family moved to Corvallis, Oregon, where her father worked for the Works Progress Administration (WPA).

She attended Corvallis High School, where she met Allen (Pat) Guerber when she was a sophomore and he was a senior.  He told friends at that time he was going to wait for and marry Thelma Gilson when she graduated – which he did.  They were married on September 18, 1942.  She began working as a telephone operator after high school graduation, but had to quit that October when Pat was gored by a bull and seriously injured on the family farm.  He survived and she found shortly thereafter that she was nearly a single mother.  Son Michael was born in June of 1943.

Thelma kept busy with community activities as a young mother, became a 4-H leader, and picked crops such a hops, strawberries and raspberries with her Gilson family members.  Second son Stephen was born in October 1947 and daughter Trudy in September 1952.  She supported her children in such interests as sports, band, and piano.

In 1964 Pat and Thelma sold Mountain View Dairy and moved to a ranch on the desert 12 miles west of Blackfoot, Idaho.  Though somewhat isolated, Thelma made friends through ranch-related activities and the Blackfoot Baptist Church.

In 1967, Pat and Thelma traded the ranch for a combination hotel-restaurant-bar in Selby, S.D. where, Thelma added to her list of close friends.  Wanting to return to the west, they sold the business in 1970 and moved to Roberts, ID where Pat worked on the Blue Stem Ranch, which was owned by Wilford Robison, a high school buddy who had been in their 1942 wedding party.

In 1974, Pat had an opportunity to oversee operation of a farm near Parma, ID and they moved into the manager's house.  They became active in a church at nearby Roswell and gained numerous additional friends, including the Kiser family for whom she baby sat the two Kiser boys; Travis and Trever.  Pat's community activities and knowledge of agriculture resulted in an offer to become farm manager at the University of Idaho Research Station, so they relocated to the other end of Parma and lived in the station manager house where Thelma continued to grow her circle of friends and welcomed all.

When Pat retired in 1988, they stayed in Parma until 2003, when Pat and Thelma moved to Sister's Villa in Eagle, ID to be closer to family.  In 2009 Thelma and Pat relocated to Tacoma Lutheran Retirement Community in Washington.  Pat passed in 2014 and Thelma continued with life in the Retirement Community, volunteering in various ways.

A memorial service will be held at a later date.  Memorial donations in lieu of flowers can be made to the elisio Foundation (formerly Tacoma Lutheran Retirement Community), 1301 Highlands Parkway, Tacoma, WA 98406 (https://eliseo.org/get-involved/foundation/) or a charity of your choice.