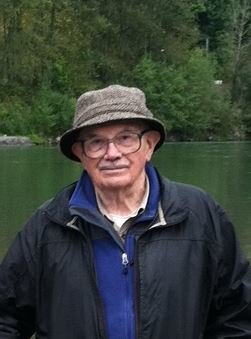 Sherburne Friend Cook (S.F.C.) Jr. passed away on 1/10/2021 at the age of 94.  Born in Springfield Massachusetts on May 5, 1926, he moved to Berkeley California in 1928 with his parents S.F.C. Senior and Violet Ester Cox.  He is survived by his wife, Jean Wilmsen Cook, sons S.F.C. III (Jerry) and Elliott B. Cook (Rick), daughter Suzanne Cook Douse and several grandkids and great grandkids.

Sherburne graduated from Berkeley High School in 1944, spent two years in the Navy and then spent most of the next 14 years at UC Berkeley, where he obtained PHD’s in Zoology and Entomology.  He was in a music conservatory between 1948 and 1950.  In 1960 he was hired by the County of Lake in Northern California to implement a biological control program for a serious economic pest, the “Clear Lake Gnat”.  This he achieved in 1970 with the introduction of the Mississippi Silverside fish into Clear Lake.  In 1972 he joined staff/faculty at The Evergreen State College in Olympia Washington, where he worked until he retired in 1979 at age 53.

After retirement in 1980, he joined forces with his wife Jean and son Jerry to open an Antique and Fine Arts business on the corner of 4th Ave and Capital Blvd in downtown Olympia.  Although the business had its ups and downs for the next 40 odd years, Sherburne Antiques and Fine Arts became well known throughout the northwest.

Sherburne loved all species of animals including mammals, birds, insects, reptiles, amphibians, etc.  He fed the birds and squirrels every morning and enjoyed watching them.  He also loved to fish and work in the antique business.