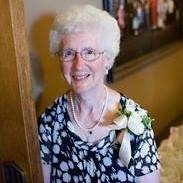 Shirley leaves behind her husband, Ken, daughters Sindy (Tom) Deming, and Sara (Mark) Leshley, and sons Scott (Lynn) Swanson and Keith (Emily) Swanson, along with 10 grandchildren and 5 great-grandchildren. Shirley was preceded in death by her brother, Donald Keeling.

Shirley's family moved to Clarkston, WA in 1947. Following graduation from Clarkston High School, she attended Whitworth College in Spokane. She met Ken Swanson at a church youth group in Moscow Idaho while he was attending University of Idaho. They were married March 29, 1952 and moved to Seattle, WA so Ken could continue his studies at the University of Washington. The next few years brought moves to Virginia and Japan while Ken served in the Army, before they settled in Tacoma, WA.

Shirley was, first and foremost, a wife and mother. She created a warm, loving home for her husband and children. She supported their interests and hobbies.

At the same time, she volunteered at her church as secretary. For years, she typed and copied the weekly church bulletin at home. She pursued her own interests of decoupage and tole painting, as time allowed. When the children were older and in school, she was employed by University Place Schools as a Para educator, specializing in reading. At a time when it was not encouraged, she sought out professional development opportunities to improve her ability to help struggling students.

Shirley loved to hunt for treasures and bargains at garage sales and Goodwill. She had a knack for finding just the right item to decorate her home. She collected special china, crystal, some furniture, lace and fabric. She always intended to create a crazy quilt with her fabric and lace finds.

Shirley and Ken enjoyed spending time at the family beach cabin in Port Ludlow, WA.  A highlight of their retirement years was a trip to Israel. The one thing Shirley loved the most was spending time with family, children and grandchildren. When asked what she would like for a birthday or other holiday, she would request to spend time with her family.

Those who knew Shirley during her life commented on her ability to “really listen” and show an interest in their lives. She will be missed by many. A private family celebration of life will be held in the future. In lieu of flowers, memorial donations may be made to World Vision (www.worldvision.org)