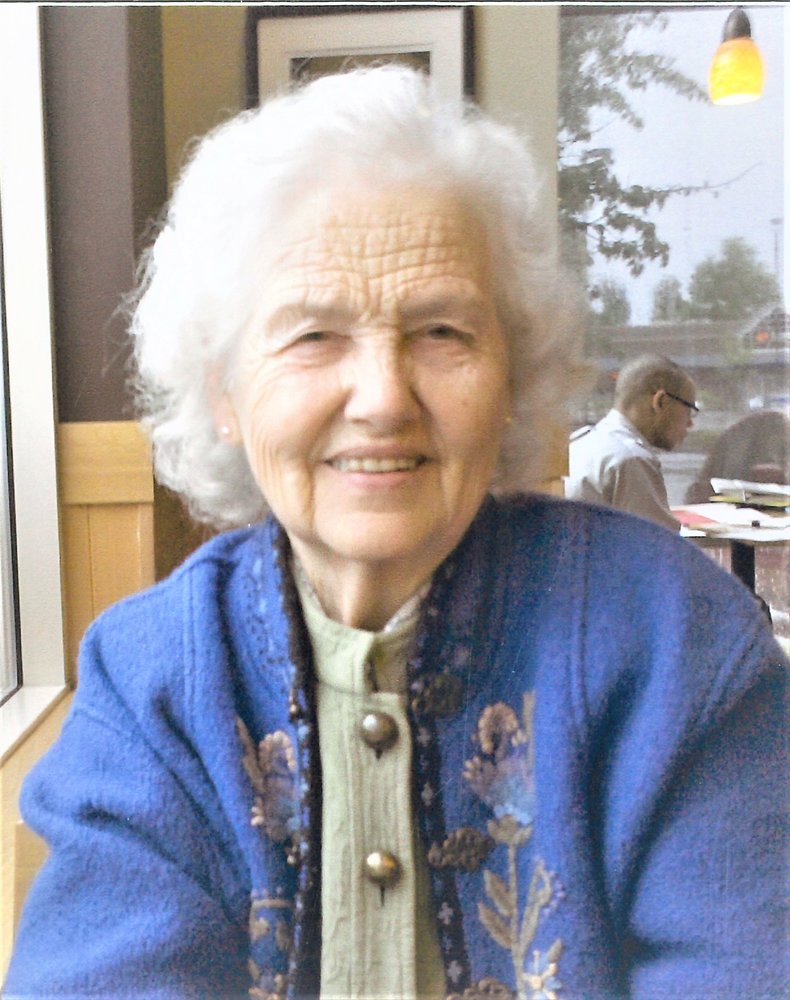 Beloved wife and mother, Inez Theresa Tweet passed into the arms of her Lord on October 9, 2020. Born November 23, 1926 in Flaxville, Montana, Inez was one of twelve children born to Ambrose and Theresa Goudy.  Inez (mom) spoke lovingly of her parents and childhood in eastern Montana.  She told fascinating stories about hard work on the farm, swimming in the summer, and ice skating in the winter.  Like her father, she loved horses and talked about how in the winter, her dad drove the school bus on sleds pulled by horses.  Her mother put a lit kerosene lantern in an upstairs window to guide them home in the dark.  Inez had great appreciation for God’s creation, always marveling at the beauty of a sunset and the autumn leaves.

When her younger brother, Donald, was hospitalized in 1943, Inez went to Wolf Point, Montana to help care for him. While living at the nurse’s home working as a nurse’s aide, she met Glen Tweet.  Shortly thereafter, Glen joined the Navy and Inez and her sister May moved to Tacoma, Washington where an older sister Grace lived.  After working briefly as a riveter in the shipyards, Inez found a nurses’ aide job which she enjoyed.  Glen followed Inez to Tacoma where they were married on June 21st, 1945 with Glen’s brother Norman and Inez’s sister May serving as witnesses.  They were together until Glen’s death in 2013

In 1950, friends invited Glen and Inez to Tabernacle Baptist Church where they accepted Jesus Christ as their Lord and Savior. A few years later, they moved to Lexington, Kentucky where Glen attended Bible School at Ashland Avenue Baptist Church.  When they returned to Washington, with authority from Bryan Station Baptist Church, they established the South Park Missionary Baptist Church. Inez was a faithful pastor’s wife for more than 40 years, as Glen faithfully preached the gospel and cared for his flock.  Living near Sea-Tac Airport, she and Glen provided warm hospitality for many visiting ministers and missionary families through the years.

Inez was preceded in death by her parents, husband Glen Tweet, son Glen Lonnie Tweet, and siblings, Emma, Grace, John, Lucille, Marian, Ambrose, Georgia and George.  She is survived by siblings Donald, May and Edithe, six children (and loving daughters-in-law) and numerous grandchildren and great-grandchildren.

Inez sang hymns to the end, and in her last moments, her children were at her bedside singing Amazing Grace.  While we know Inez is present with her Savior, we will miss her so very much!

The service will be streamed simultaneously on YouTube at:  https://www.youtube.com/results?search_query=lakewood+baptist+temple.

In lieu of flowers, donations may be made to missionary work through the South Park Missionary Baptist Church, 8510 8th Avenue South, Seattle 98108.

To send flowers to the family or plant a tree in memory of Inez Tweet, please visit Tribute Store
Print
Share A Memory
Send Flowers