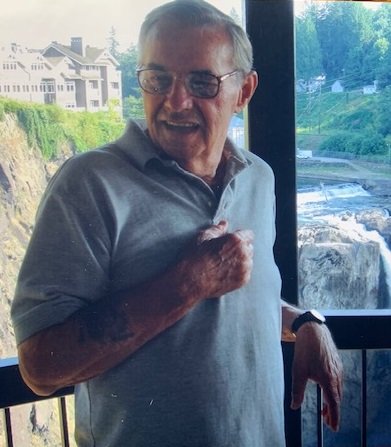 Howard Long was born in Newark, Delaware on September 14, 1933, and passed away peacefully on March 10, 2020 in Des Moines, WA.  He is survived by his three daughters Renee, Carrie and Jody and six grandchildren.

Howard served our country in the United States Navy from 1951-1959.  He received an Honorable Discharge for his services.

Howard’s favorite hobbies were reading, watching all types of sports (especially the Mariners and the Seahawks), and going for walks.  He also loved going out to dinner with his family and he loved to travel.  He travelled across the country by car or train thirty-four times.

Howard was the type of man that would give the shirt off his back to anyone, even to a complete stranger.  He had a very kind, genuine, gentle heart and demeanor about himself.  Everyone that met him loved him.  Howard was also a very fair man to everyone.

Howard loved telling stories about his past which mostly included his childhood and years growing up.  He loved talking about his family- his mom, dad and two brothers and how they survived the depression.  He had many stories about things they had and didn’t have, the first time they bought a TV and where they lived.  He would always talk about how far money would go back then.  He would love to give examples of when his mom would send him to the store with $1 and he could buy four items and still come back with change. This fascinated him!  He could never grasp on to the cost of things today.

Howard had a photographic memory.  He could remember every address he lived at and every vehicle he had including the color, make and model plus the license plate number.  He remembered all his phone numbers he’s ever had and phone numbers to his family and friends.  We were all amazed and it was very impressive to people.

In honor of Howard’s wishes, he did not want to have any memorial services but will be placed in the columbarium at Tahoma National Cemetery located at 18600 SE 240th St., Kent, WA  98042.