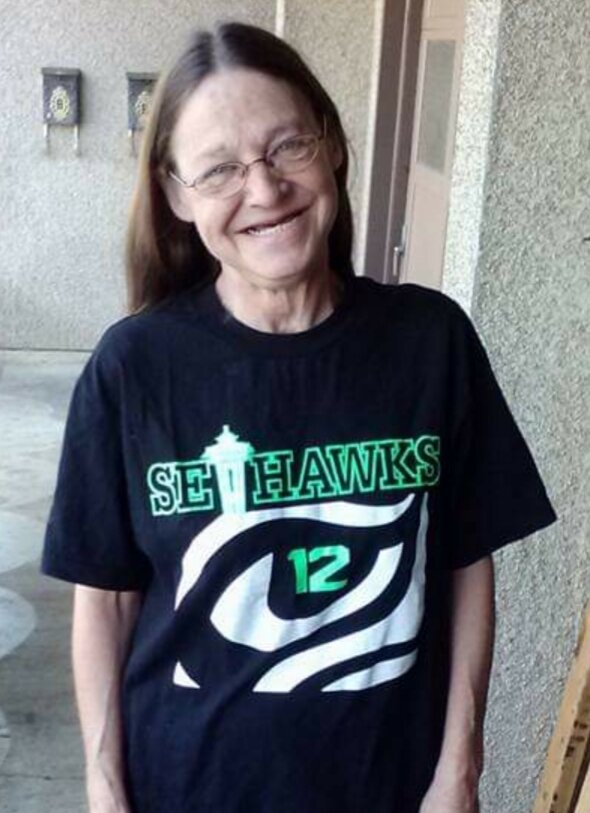 On December 6th, 2022, Theresa Lynn Torstenson passed away, surrounded by
loved ones, in her long time home of 28 yrs, Shelton, Washington. She was born on flag day, June 14th 1960 in Seattle, Washington to Charles and Gladys Torstenson. She
was the second youngest of their close knit family of seven children. She grew up surrounded by family in the White Center area of Seattle with plenty of Aunts, Uncles, and cousins nearby.

Theresa loved her Native American roots and was a proud member of the Blackfeet Nation. She decorated her home with native art and figurines, and filled the walls with cherished pictures of all her loved ones.
In 1980 Theresa was blessed with her only child, a baby boy, Brian Torstenson.

Brian was Theresa’s world and she worked incredibly hard, sometimes working
more than one job at a time, to support her son as a single mother. She became a Grandmother when Brian became a step father to his daughter Alexis Borst, and again in 2006 when her sunshine, grandson Brian Torstenson was born.

Theresa put family above everything, even herself. Instead of hobbies, Theresa
spent her time on her family. She always made sure to call to say happy birthday,
and was at every family holiday and function she could get to. Throughout her life,
she has demonstrated unconditional love to her family that has inspired the younger generation of her family and will have a lasting effect which will continue to shape
the future of the Torstenson family.

When tragedy struck, and her son fell ill, she devotedly cared for him till his passing
in 2015. Her unconditional love for her family and especially her love and devotion
for her grandchildren helped Theresa survive the painful and single hardest loss of
her life. Throughout the years, when a family member was ill or had fallen on hard
times Theresa never hesitated to help in any way she could. You could always
count on a kind word of encouragement, a loving embrace, or understanding when
you just needed a place to sit and be left alone for a bit.

When she became sick herself, she fought hard, not for herself, but to be there for
her family and mostly her grandson for as long as she possibly could. Until the very end her concerns were only for her family.

Theresa is preceded in death by her parents Charles and Gladys, her sisters
Dorothy Jelvik and Mary Johnson, nephew Paul Johnson, and her only child, her son Brian Torstenson.
Theresa is survived by her Grandson Brian Torstenson, and Granddaughter Alexis
Borst, and her siblings; brother Andy (Sandy) Torstenson; sister Donna (Mike)
Quinlivin; brother Joe Torstenson; sister Janet (Steve) Adams, and many nieces
and nephews, great nieces and nephews, and great great nieces and nephews.
Theresa was a devoted daughter, Sister, Mother, Grandmother, Aunt, and friend.
She would do anything for those she loved. She is deeply cherished and will be
truly missed.

While Theresa may be gone from this world now, her legacy of love, commitment to
family, and dedication to friends will live on in the many lives she has touched.

A "Celebration of Life" will be held on, Friday December 30th at 3:00PM At Squaxin Island Community Kitchen 59 SE Squaxin Lane

To send flowers to the family or plant a tree in memory of Theresa Torstenson, please visit Tribute Store

Share Your Memory of
Theresa
Upload Your Memory View All Memories
Be the first to upload a memory!
Share A Memory
Send Flowers
Plant a Tree