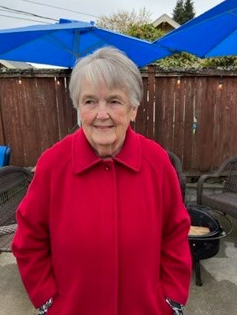 We remember and celebrate our mother, Kathryn Buell Kirchen Vanderhorst.  Kathryn was born in Long Beach, California.  She grew up in Los Angeles and that is where she met and married John Vanderhorst when she was 18 years old.  They produced and raised ten children in a little stucco cottage in the movie studio studded suburb of Culver City.  MGM was down the street and DesiLou was around the corner but there was enough action and emotion in Jasmine Avenue to keep everyone occupied.

More excitement was generated during this era when Kathryn procured work in the administration office of Dr. Glen Langer’s Heart Research Lab at UCLA Medical Center.  Kathryn loved everything about the job and the family became accustomed to frequenting the campus, and surrounding Westwood Village.  Kathryn’s two oldest sons, Matthew and Joseph would choose UCLA for their future education.

Around 1972, John purchased a small avocado farm in Fallbrook in San Diego County.  The majority of the family made the move to this rural outpost and made the best of a new and different lifestyle.  Kathryn managed the family and the farm during the week; John commuted on weekends, until the marriage dissolved in the late 1970s.

It must be said that Kathryn’s love of learning, and her understanding of the value of education led her to encourage and support all of her children in attaining a college education.  Her influence was strong and each of her ten children has earned at least a Bachelor’s degree.

Kathryn eventually retired and left the heat, smog and busyness of Los Angeles for the coastal town of Pacific Grove in Monterey.  Kathryn had always loved the ocean and delighted in the crisp atmosphere and quaint charm of Pacific Grove.  She settled in and became an active and energetic member of the congregation of St. Angela’s Catholic Church.

Always an adventurer, Kathryn changed her environment again early in the new millennium.  She moved to the state of Washington and settled into another little cottage, not far from Puget Sound in Tacoma.  She found the parish of St. Leo and again became an active member of the church community.  Her youngest daughter, Mary lived nearby.  One of her younger sons, Walter, also migrated to Washington.  He lived in the neighborhood long enough to engage Kathryn not only in backyard barbecues, but also excursions to Seattle for music and art events.  Most impressively, the two of them went on several camping road trips to view the phenomenon of solar and lunar eclipses from dark fields in Idaho!

Kathryn’s son, Mark was invited to live with her.  He introduced Roger, the dog and the three of them shared the cottage until Kathryn’s lung disorder led to increasingly frequent and severe episodes of pneumonia.

Kathryn died as she had lived, with determination, strength of will and a hugely optimistic sense of adventure.  Kathryn is survived by all of her children:  Stephanie, Matthew, Joseph, Paul, Kathryn (Katie), Walter, Philip, Mark, Ann and Mary.  We salute Kathryn and will be determined to uphold her memory in our lives going forward.

Share Your Memory of
Kathryn
Upload Your Memory View All Memories
Be the first to upload a memory!
Share A Memory