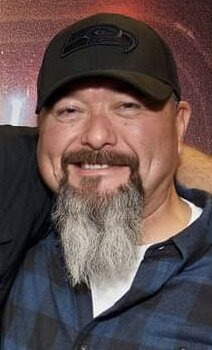 He was born in Ft Hood, Texas November 19, 1970. During his childhood, he was an army brat and they lived in California, Korea, Germany before moving to Washington in 1982. Jesse was a Foss High School graduate, where he lettered in football and played on his church softball team. He was active in his church and was at youth group every week. Jesse moved to Arizona after high school to attend a tech school for computer aided drafting. He would complete his 2-year degree and move back to Washington to pursue a career in plumbing. Jesse was a member of the Local 26 Plumbers and Pipefitters Union for over 20 years. He worked his way up and became a journeyman, and then a foreman. If you ever rode in the car with Jesse, he’d always point out places he had done plumbing work at.

Jesse is survived by the love of his life- Tammy, who he married April 13, 2012. His children Christopher Peebles, Stephanie Peebles (Brandon), Cameron (Breanna) Peebles, Chelsee (Brett) Needham, Connor Britt, Nathan Robinson and Amanda (Brandon) Phillips. Jesse was a proud Papa to 5 grandsons and 1 granddaughter. Jesse and Tammy have 3 cherished dogs as well- Goliath, Madi and Pluto. He is also survived by his parents- Jesse and Miyoko Peebles, siblings- Tom (Sarah) Peebles, and his twin Joan (Tim) Lougheed.

Anyone who met Jesse was a friend. He was intelligent, genuine, and very funny. Jesse had the most infectious laugh you could hear from across the house. He was a huge Seahawks and UW Husky fan. He loved football, having friends and family over, and cooking for others. He was the master smoker- ribs, brisket etc.

Faith, Family and Football. That is who Jesse was. He leaves an incredible hole in our hearts, in our lives, and in the world. A private service will be held for the family.

To send flowers to the family or plant a tree in memory of Jesse Peebles, please visit Tribute Store

Share Your Memory of
Jesse
Upload Your Memory View All Memories
Be the first to upload a memory!
Share A Memory
Send Flowers
Plant a Tree