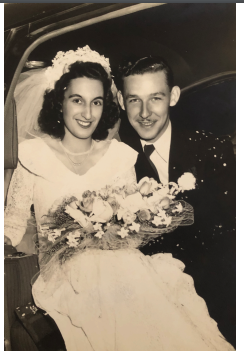 Calm and selfless, Helen was always the quiet strength behind the scene. Helen was preceded in death by her husband Morgan George in 2018. Her joy in life evolved around children Karen Peck and Diane Grier (Tony) , grandchildren Chauney (Chris) and Morgan (Patrick) and Alex (Sarena). And most recently great grandchildren; Rudy, Shane, Elio, and June. Born and raised in Vancouver, B.C. Canada, Helen married an American sailor, moved to Virginia and had children while thousands of miles from home and family. Her career as a military wife had times of single parenting ( before it was a term) while fully embracing the culture of their location, especially the family’s 4 years in Hawaii in the 60’s. Helen left full time parenting when her girls were in their teens for full time work at McChord Air Force Base as a secretary in the Civil Engineers Office in the 70’s. Her expertise was typing quickly and shorthand. Helen and George built their dream home in Steilacoom where they spent 40 years right into retirement years. They were able to travel to China, Fiji, Tahiti, and Hawaii many times as well as traveling as far as the east coast in their motor home. Much time was spent at their cabin in Ocean Shores with children and grandchildren. Our family would like to give appreciation to the many staff members at Franke Tobey Jones for their compassionate care for the past eleven years. A celebration of life will be held at Ocean Shores in the Summer.

Share Your Memory of
Helen
Upload Your Memory View All Memories
Be the first to upload a memory!
Share A Memory