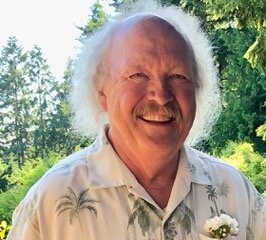 Dr. Kenneth Rousslang, 74, passed away suddenly from a heart attack while on a bike ride with his wife Mary Magee and friends. His loss is incalculable. He was a brilliant, witty, wise, kind, loving man. A wonderful husband, father and friend to all. Ken was born in Portland, Oregon to Arnold and Catherine (Bieringer) Rousslang, and grew up with his family on the banks of Clear Creek in Carver, Oregon. Here he spent many hours fishing, swimming and helping with the family’s picnic park, Wilsada. As a child, his teachers recognized his high intelligence and enlisted him to help his classmates. He graduated from Clackamas High School and Portland State University. Ken began graduate school at the University of Washington Chemistry Department in 1970 where he earned the Outstanding Teaching Assistant Award for five consecutive years. Seattle is where he met his wife, Mary Magee, whom he married in 1979. After completing his PhD, Ken was hired by the University of Puget Sound as a professor of Physical Chemistry. He enjoyed many years there, especially when he overlapped with Professor John Magee, Mary’s father. He taught at Puget Sound through 2008. During his 33-year tenure he mentored many students both in coursework and in cutting edge research. He chaired the department for several years and received many honors. In 1989 he presented his research as that year’s Regester Lecturer at Kilworth Chapel, and received the President’s Award for Excellence in Teaching in 2002. He was appointed Professor of Natural Sciences in 2006. A symposium was held at the University in 2009 featuring many of his students who had gone on to graduate work and careers in academia.

Ken, often known simply as Rousslang, had a warm smile, incredible energy and a zest for life. In his younger years he climbed mountains, played baseball, ran marathons and cycled. He was an early Mariners fan. In 1988 he and Mary welcomed their beautiful son Zach into the world. The family moved from Tacoma to Gig Harbor in 1990, settling in Cromwell. Ken was a devoted father who nurtured Zach completely. He captained the family’s power boat, “Spirit,” for many fun summers on Puget Sound. He and Mary enjoyed traveling, cycling, and entertaining. Ken was an aspiring weatherman who set up a personal weather station. He was an extraordinary chef and maker of delicious cocktails. He grew a prolific garden, and also created a shellfish farm on his beach access that produced fresh oysters and mussels. Cycling gave him great joy and he spent many hours cycling on his own, and often with Mary and friends. He remained active in spite of many years of severe back pain. As his friend and colleague Tom said, “May Ken transcend all boundaries and find peace in this universe.”

Services will be announced at a later date.