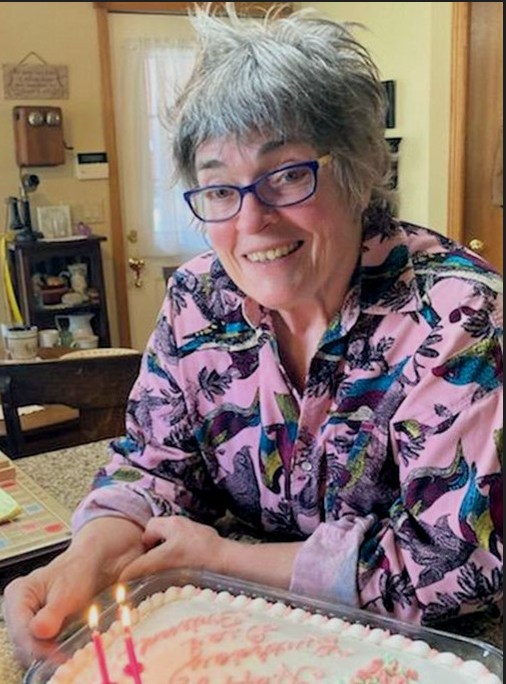 Kathleen Joan (Chase) Borba was born in Snohomish, WA on Feb. 20, 1946 to parents Leo D. Chase and Kathleen M. Chase. She moved with her family to South Tacoma when she was two-years-old and lived on the family property there for the remainder of her life.

Kay, as she preferred to be called (her mother was “Kathleen” and Kay was determined to be unique), grew up an avid roller-skater and consummate academic. She also tirelessly worked the family’s farmland. Although it was hard work for a young girl, being expected to pull the same weight as her older siblings, Kay grew up to respect and love the land. She also very much adored those farm cows.

At the age of sixteen Kay met Albert J. Borba, from Chowchilla, CA, who was stationed at Fort Lewis at the time. They were married on February 23, 1963. Kay gave birth to her first child, a son, Anthony J. Borba, followed by two daughters, Holly J. Borba and Necia J. Borba, and another son, Bryce J. Borba. She was extremely proud of her family. Kay loved her children unconditionally - admiring their individuality, praising their strengths and cheering them on to do their best.

Kay finished her high school diploma via night school shortly after the birth of her first child and she spent many years as wife and mother, expert sewer, driver of a gigantic green station wagon, baker of beloved birthday cakes and cookies, organizer extraordinaire of camping trips and best darn Christmas tree decorator in the west (and sometimes Christmas tree liberator, but that is a story for another time).

In the early 1980s she began volunteering in her youngest children’s Kindergarten classes, which eventually led to a job as teachers aid for several years.

In the late 1980s Kay began volunteering at Nativity House, a homeless day shelter in downtown Tacoma. Her volunteer work eventually led to her being the Director of Nativity House in 1991-1992. In her Nativity House and Catholic Worker community she found lifelong, soul friends and together they spent time and love with those on the margins and if you were lucky, Kay took you along for the ride.

Kay’s career path brought her to licensed massage therapy and other health and wellness professions. She was passionate about the art of massage and practiced for many years until carpal tunnel sidelined her. Not ready to stop working, and always on the search for ways to serve her community, Kay joined the North American Syringe Exchange Network and Point Defiance AIDS Projects, where she eventually retired.

In between mothering and working, Kay became an avid traveler. After a first trip to Europe with her sister in the early 1980s she was hooked, traveling as far and wide as Ireland, Turkey, Mexico, Guatemala, and Bolivia. A trip to the ocean at Westport, WA was always a beloved destination. She made it a goal to pass along a love of travel to her grandchildren (or at least expose them to it, even if it was only a camping trip). Kay had seven dearly cherished grandchildren; Amanda and Jacob (Anthony), Petra (Holly), Alex, Lizie, Luke and Janesa (Bryce). She loved her family fiercely and especially enjoyed celebrating holidays with them and going on camping trips. Camping, gardening and being in the woods or at the ocean were the most frequent ways in which she honored her love and reverence for nature.

Kay treasured the individual relationships she shared with her in-law and out-law children, Alice, Annie, Pablo and Rhonda - treating and loving them as her own.

Kay served her beloved Tacoma community in so many ways - in mentoring, ministering and sometimes mischief-making. Her friendships were intentional and joyful; she was forgiving and accepting in equal depths. She was deeply spiritual, found God in all things, and also injected a healthy dose of irreverence at the right times.

Kay was an artist, creative in most things she did, but anyone gifted with one of her quilts knows just how talented her hands truly were. She was cutthroat when it came to playing games, usually cards, though Scrabble is where her true passion for competition began and ended. She was a scholar without ever obtaining a college degree, often the smartest person in the room at any given time. She had a vast knowledge of a large variety of subjects and was a math whiz, but carried her brilliance with humility and gratitude.

Kay Borba was a tough Irish gal and utterly stubborn at times (some even lovingly called her Bulldog Borba), yet she was always available with open arms to bestow upon you the most amazingly genuine hugs.

The last three months of her life were spent in hospitals and nursing facilities, where her caregivers often remarked on how charming Kay was, and occasionally made it known that she was one of their favorite patients to tend. Kay spent her last few precious days at Franciscan Hospice House and her family often heard from staff how many friends visited her. It wasn’t a contest, but Kay was winning.

She was loved by many. She’ll be remembered by all who knew her. Her indomitable spirit will reside in our hearts forever.

A memorial in Kay’s honor, and a tribute fitting her wild and wide spirit, will be held in October.

Share Your Memory of
Kathleen
Upload Your Memory View All Memories
Be the first to upload a memory!
Share A Memory