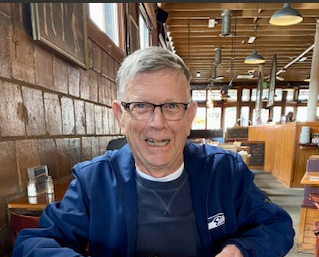 Born 2/21/1940 in Tiffin, Ohio to Marcella & Eugene Hartzell. Dick was one of 6 children: Brother to Tom, Charlene, Harry, Janie, and Sandy. He didn’t always have an easy childhood, but he always said he had his brothers and his sisters, a roof over his head and three meals a day, so he was lucky. At the conclusion of high school Dick joined the Army and was sent to Greenland’s Thule Missile Base. Before leaving the military, he was transferred to California where he met his future wife, Patricia Barb. They wed in April of 1965 and in November they had their first child. Nearly 8 years later, they had four children: Christina Briant (Keith), Paul Hartzell, Kevin Hartzell (Jennifer), and Patrice Armstrong (Jeff). Dick and Pat lived in Kansas, California and in 1968 settled in Washington State (Tacoma). After working a few different jobs, Dick became a journeyman electrician with Tacoma City Light where he retired after 26 years at the young age of 57.

Dick enjoyed many things, but most of all hunting and fishing. Rumor has it he had a fishing pole in his utility truck and snuck in a few hours whenever he could. In 1985 he completed his Packwood-mountain cabin and in 1997 moved permanently to his home away from home. Later in life, he became a ‘snow-bird’ with his partner and neighbor Nancy Webber. Together they spent time in Maui and Arizona, golfing and enjoying life.

Dick was frugal (not materialistic at all), but never hesitated to help people he loved and cared about. In this way, he was very generous. He had sayings or responses for everything. Many sayings became family favorites. You simply can’t say SUPER without thinking of Dick with a smile on your face.

Dick will be buried at Tahoma National Cemetery with full honors on 7/19/22 at 12:30pm. However, Dick will not be in attendance. He’s gone to see a man about a horse, then he’ll be hunting and fishing with his older brother Tom or playing cards with his mom. He deserves every moment of heaven happiness, so we don’t mind. We miss you Dad, Grandpa, Brother, Uncle and Friend. Until we see you again, Tee-Too (Good-bye).

Share Your Memory of
Richard
Upload Your Memory View All Memories
Be the first to upload a memory!
Share A Memory