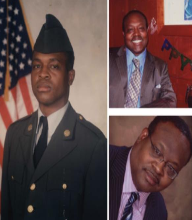 Terrence Marico Hamilton was a caring son, brother, brother-in-law, uncle and friend.  He left this world suddenly on February 25, 2022 at the age of 49 from an unexpected heart failure. Even though a failing heart took him away from this world, his loving heart left a beacon of light.

Terrence was born to Chilmus “Chad” and Margaret Hamilton on December 24, 1972.  He accepted Jesus as Lord in his teen years. After graduating from high school, he pursued College at Memphis State University only to open himself to a new discovery of Military enrollment with the United States Coast Guard. He was honorably discharged while in Seattle Washington, where he decided to reside.

To send flowers to the family or plant a tree in memory of Terrence Hamilton, please visit Tribute Store

Share Your Memory of
Terrence
Upload Your Memory View All Memories
Be the first to upload a memory!
Share A Memory
Send Flowers
Plant a Tree