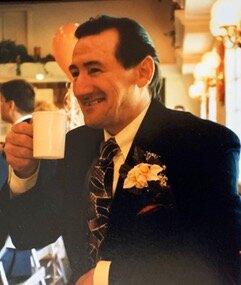 Robert Andrue Ludwick passed away at home on December 27th, 2021 with family, following a lung cancer diagnosis. Born September 22nd, 1944, in Somerville, MA to Francis J. Ludwick and Elsie Ludwick. He grew up in Boston, MA, lived in Holliston, MA, enlisted in the Navy in Cheyenne, WY, was stationed on the USS Iwo Jima out of San Diego, CA and saw quite a bit of the world.

After his tour in Vietnam, he and his then wife, Marge, welcomed their daughter Lori into the world and moved to Olalla, Washington where they bought a farmhouse on 15-acres. The man from the city quickly adapted to life in the country. Bob built and operated a sawmill on the property, raised livestock, a garden, and a loving family.

Bob worked at the Puget Sound Naval Shipyard for 34 years as a machinist before retiring. He loved to cook, read Louis L’Amour books, travel in his RV, watch NASCAR races, hockey, college football, and spend time with friends and family. He was also the king of the practical joke.

Bob leaves his daughter, Lori Aest and her husband Greg, his grandson, Max Haas and granddaughter, Alexia Aest of Gig Harbor, WA, his nephew, Marty Ludwick and his wife, Becky, of Deering NH along with an inspiring number of great friends, all of whom he loved very dearly.