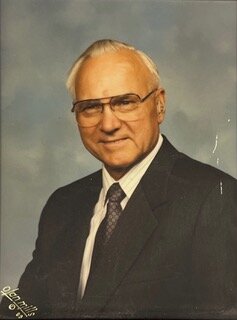 Roland Leigh Porter Jr, faithful servant, rested on November 24, 2021, at the age of 96. Born in Woburn, Massachusetts on June 29, 1925, he was the son of the late Roland Leigh Porter and Mabel Sophia Porter (Switzer). When he was five years old, his family moved to Digby County Nova Scotia. He was always eager to share fond memories of his childhood years spent on the farm there. In 1939, his family moved back to the United States, settling in Newton Highlands, Massachusetts. After achieving the rank of Sergeant and serving as a B-24 radio operator and machine gunner in the Army Air Corps from 1943 to 1946, Roland spent most of his life working in the HVAC industry. Roland was an active member of his faith and took every opportunity he had to share a story from the Bible, debate the meaning of a story, and celebrate with the singing of a hymn. In 1997, to be a more effective lay minister, he began taking classes at Western Reformed Seminary. Eleven years later, at the age of 82, he graduated with a Certificate in Christian Ministry, and with great joy, he was ordained in March of 2009.

Along with his parents, those waiting, for him to join the Church Triumphant include his wife of 30 years, Eleanor Drake Porter (Miller) (2014), Mark Roland Porter (Julie) (2017) and his sisters Dorothy, Hazel, and Virginia. He is survived by his son John Porter of Bremerton, WA, his daughter Melinda Whitney (Clarke) of Silverdale, WA, his daughter Holly Herkenhoff (Michael) of Florida, and his sister Ann of Nova Scotia. He was blessed with grandchildren Maxx, Miles, Marlie, Austin, Jordann, and Jilliann. Roland also has other family including nieces and nephews in Nova Scotia and Pennsylvania that have great memories of him and some wonderful stories. Along with his children and their families, he has three stepchildren and 11 step-grandchildren that love him and have all been blessed to include Roland in their family.

A memorial for Roland will be held on Thursday, December 30, 2021, at 10:00 a.m. at the Rosedale Reformed Bible Church, 8620 Rosedale St NW Gig Harbor, 98335, with a reception to follow. This will be followed by a grave-side service at Vaughn Bay Cemetery at 1:00 p.m. In lieu of flowers, the family asks that contributions be made to the Rosedale Reformed Bible Church, RRBC@rosedalereformedbiblechurch.com

Arrangements are by Edwards Memorial Service.

To send flowers to the family or plant a tree in memory of Roland Porter, please visit Tribute Store