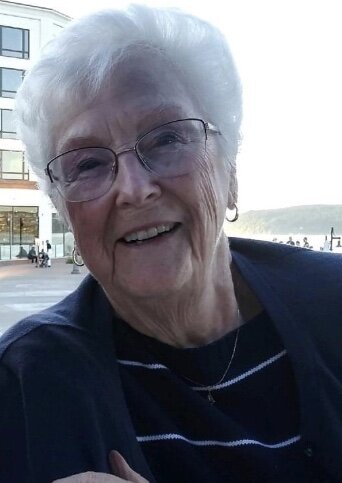 Beverly Jacobson passed away comfortably 12/14/21 at home in Gig Harbor, Washington, surrounded by family following a brief battle with pancreatic cancer. She was the youngest of six children born to Martin Selmer Henderson and wife, Ruth, on May 25, 1940 in Fargo, North Dakota. She graduated from Fargo Central High School in 1958 and entered Jamestown College (now the University of Jamestown) that fall.

Not wanting to go to the farm to pick rocks in the summer, her Dad allowed her to go to summer school and she graduated in 1961. She met her future husband, Curtis, in college and they were married the day after Christmas, 1960. He taught in Jamestown during the 1960-61 school year and they both taught in Glasgow, Montana the next three years. In that era several North Dakota schools didn’t hire married women!

They moved to Spokane, Washington in 1964 where Curtis started a banking career which lasted until his retirement in 2000. In 1965 they were blessed with their daughter, Sara, and two years later with a son, Bruce. They moved several times over the next 46 years to Pasco and Seattle, Washington, Boise, Idaho, Poulsbo and Port Angeles, Washington, and finally settled in Gig Harbor, Washington in 2010.

Her parents, two older brothers and a sister preceded her in death. Sister, Marilyn and her husband, William Parker, and brother, Alan, with wife Joyce, all live in Fargo, North Dakota.

Her daughter, Sara, and husband Emanuel Schroeter, live on Fox Island with daughters Kassie and Katie. Her son Bruce and wife, Julie, live in Lake Stevens, Washington as does their daughter, Krysanie, with children Zander and Brynley and significant other, Bucky Gillum.

Though lengthy car trips were not her favorite mode of transportation, after leaving North Dakota in 1961, hardly a year went by that didn’t include a trek back home.

During her lifetime Bev was very active in the churches they attended. She enjoyed tole painting, playing bridge and board games, attending events in which the kids and grandkids were involved and making pies. No one made a better apple pie. She liked cooking, especially when someone else suggested what sounded good. She also looked forward to reading the Fargo Central High Cynosure and kept in touch with several girls in her high school potluck.

A memorial service will be held at a future date in early 2022 in Gig Harbor, Washington.

To send flowers to the family or plant a tree in memory of Beverly Jacobson, please visit Tribute Store