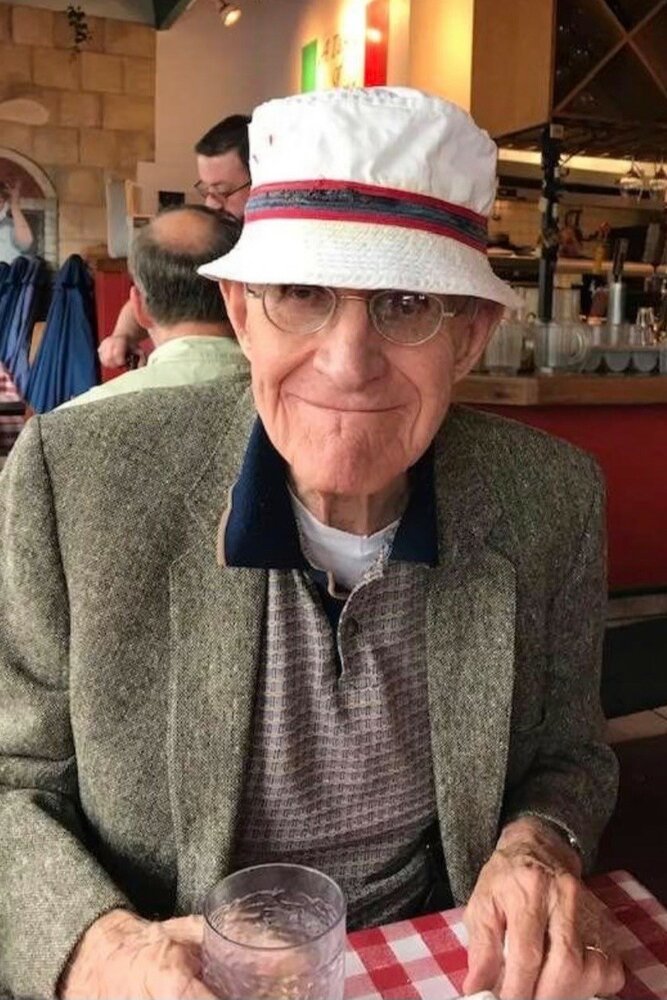 Earl Randolph Uthus, 97, of Tacoma, Washington died peacefully on December 1, 2021, surrounded by loving family members. “Tupp”, as he was known to family and close friends, was born on November 21, 1924, in Fargo, North Dakota. His father, Carl Olsen Uthus, a first-generation Norwegian immigrant and a carpenter by trade; and his mother, Esther Pedersen Uthus; urged their 7 children to attend college. All did, and all graduated to pursue notable careers.

Earl enlisted in the U.S. Army following high school graduation. Shortly thereafter, Earl’s regiment shipped from San Diego to Kodiak Island, Alaska to join an attack force to destroy Japanese military installations on the Aleutian Island of Kiska. The Japanese considered the Aleutian’s a potential launch site for an attack upon the U.S. soil that would begin with Anchorage and extend south to Seattle and San Francisco. On the morning of August 15, 1943, American forces stormed Kiska’s rugged shore in two locations--only to find the Japanese had hurriedly abandoned their positions two weeks earlier, leaving behind supplies, equipment, and booby traps. When it was determined Alaska was no longer under threat of attack, Earl was selected for the legendary 10th Mountain Division, training in high-elevation winter conditions at Camp Hale, Colorado.

Following an honorable discharge at the War’s conclusion, Earl returned to Fargo to enroll in North Dakota State University under the G.I. Bill, graduating with degrees in architecture and engineering. As a student he met his wife to be, Darlene Swenson, of Hitterdal, MN, after first corresponding with her during his Army service. A volunteer effort by Darlene to support U.S. servicemen in wartime, her letter-writing blossomed into marriage after meeting Earl and dating.

Upon Earl’s graduation the couple moved to Seattle to accept a job offer from The Boeing Company. Earl played a key role designing the wing of Boeing’s B-52 Stratofortress, the USAF long-range bomber built to carry nuclear armaments for the Cold War era, still flying today.

After Boeing, Earl and Darlene moved to Tacoma, WA where Earl worked for several years in architectural firms, designing commercial buildings and structures. He then joined the U.S. General Services Administration (GSA) in Auburn, WA as a principal architect, where he spent the remainder of his career, except for of a multi-year assignment in the 1970’s overseeing design and construction of officer family housing and administrative facilities for the U.S. Navy Trident Submarine Base in Bangor, WA.

While at GSA, Earl was given the lead assignment as Architect in Charge of Construction for overseeing building of the U.S. Pavilion for the “Expo ’74” World’s Fair in Spokane, WA. Earl considered a career milestone the on-time, on-budget completion of 11 sites and facilities representing the U.S. official host presence. GSA recognized Earl for his achievement, accomplished in just seventeen months and requiring many nights and weekends, at an awards dinner held in Washington, D.C. following the conclusion of Expo ’74.

Earl’s children and his extended family describe him as a true “family man”. He always said his Army stint provided more than enough experience sleeping in a snowbound pup tent, but that didn’t stop him from joining the Seattle Mountaineers and introducing his children to skiing.

Ski outings to Whistler, Snoqualmie Summit, and Crystal Mountain are fond family memories, as are trips in the family station wagon to Mount Rainier and other Pacific Northwest outdoor destinations for picnics and hiking.

Earl loved golf. How can those who played with him forget this tall, lanky golfer in his pork pie hat walking—never riding—among the eighteen holes? He loved teaching family members and showed patience and generosity with his tips and demonstrations. However, woe be to anyone in his party who broke or bent the official Rules of Golf. Earl took no mulligans. Occasionally, he would write the PGA about rules infractions he observed during televised events or, drawing upon his engineering background, to critique, say, a new dimple design for golf balls.

Earl learned his carpentry skills from his dad in North Dakota. He put them to work helping his two sons-in-law with a house addition and a basement renovation. He asked them to hold the “dumb end of the tape” while he performed rise & run math for stairs or roof in his head. Sometimes gruff on the outside, but always warm-hearted on the inside, you had to be on your toes to avoid being fired as his carpenter’s helper.

Earl had a sharp wit and loved to tease. A few months before he died, his daughter Jennifer took him to a doctor’s appointment which began with a nurse’s interview. “How old are you, Earl?”, she asked. “I’ll tell you my age if you tell me your weight.”, he replied. The nurse laughed uproariously. She learned his age without revealing her weight.

Earl and Darlene gave unstintingly of their time to help family members and others less fortunate. Both volunteered for many years at Tacoma’s McCarver Elementary School to help young students develop their reading and writing skills. They enjoyed traveling, ballroom dancing, and spending time with family. The couple celebrated their 75th wedding anniversary on October 25th, 2021.

Burial will be in the Tahoma National Cemetery, in Kent, WA. The family will hold a private Celebration of Life at a future date. In lieu of flowers, the family requests that contributions be made in Earl’s name to the Salvation Army Tacoma.