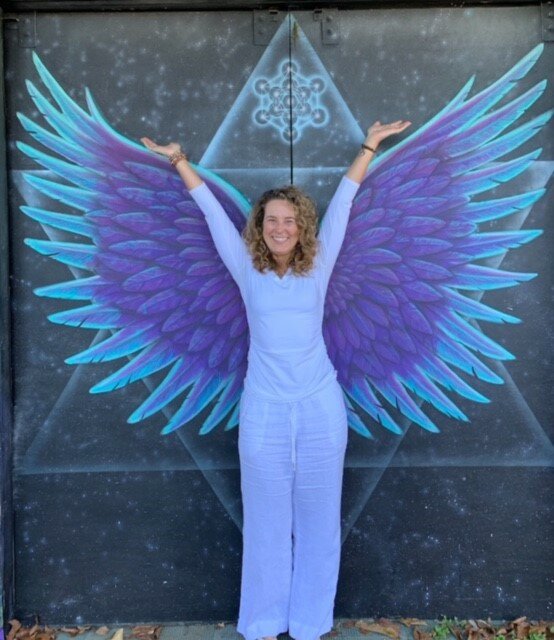 We lost one of the “good ones” recently. Our adventurous, fun-loving spirit has moved on. We will miss her joie-de-vivre and never say no attitude.  She lived a life that she described as a gold ticket incarnation.  Her passion to help others will be missed but not forgotten by those she impacted through her courage, generosity, kindness, love, and genuine willingness to help those in greatest need.  To live life in the moment – To Be Here Now – was her motto.  She was so aware and appreciative of the simple things in life – rustling leaves, clouds in the sky, a kitten’s purr.  She would gaze about in awe at the wonders of the world. She would never miss a chance to pet a dog.  She would get right up in their face for a lick, but she would exclaim “no French kissing” to them, and then pronounce, “he gets dog of the day.”  At those moments, her face would light up with pure bliss.  I am sure remembering her will bring a wide smile to all our faces as well as we exclaim that was a life well-lived.  She will be missed but never forgotten.

Sarah was on born in Illinois, the daughter of George and Virginia Kenefick, on November 11, 1971.  She was a graduate of Peninsula High School in Gig Harbor, WA.  She received a bachelor’s degree in business from the University of Washington.  Additionally, she received master’s degrees in business administration from Seattle University and counseling from University of Massachusetts.  She was the author of three books: the most important to her being - Vegetarian to Vegan – an exploration of the cruelty of animal husbandry.  She was an entrepreneur who started a public speaking company, Taylor Presentations and she created a product, The Stackable Gourmet, which sold on the Home Shopping Network.  She worked in pharmaceutical sales for Merck, then later in ophthalmology research for both Merck and Genentech.

Her life was driven to serve. Her most cherished career was her last as a counselor when she worked with cancer patients.  Ironically, she was diagnosed with brain cancer at this time. However, now firsthand, she could teach them how to surrender to a possibly deadly diagnosis, to accept and to embrace it, and to still live a fulfilling life. She created a video, Be Here Now, which embraces living in the moment as well as a YouTube channel encouraging people to live their lives more fully.

Her eyes sparkled their brightest when she was in the company of animals, especially “puppies”, hitting a two-handed backhand down the line, singing kirtan, walking the beaches of Maui barefoot, and talking with her closest friends.

She is survived by her mother, Virginia Kenefick, her husband, Mark Taylor, her sister, Karen Millican, and her nephew, Barrett Massand.  A memorial service in her honor was held on October 10, 2021 in Tacoma, Washington.

To send flowers to the family or plant a tree in memory of Sarah Taylor, please visit Tribute Store