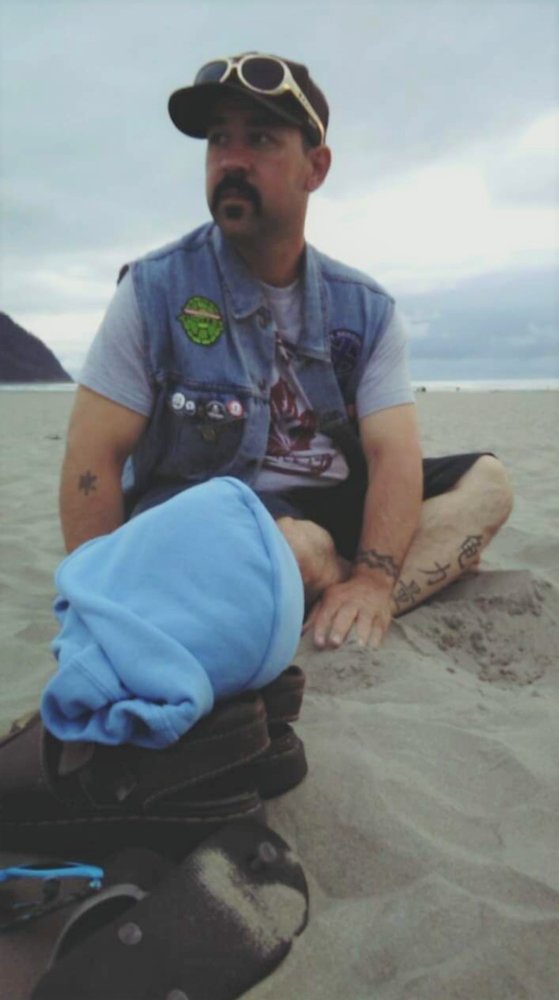 Edward Duane Hedington Jr. was born on November 27, 1979, in Sedro-Woolley, WA. He attended Sedro-Woolley High School and then attended Bellingham Technical College, where he received his Bachelors Degree in Environmental Science. He was currently working for U.S. Oil out of Tacoma.

Eddy married Tierra on 10/22/2004 in Mount Vernon, WA.  Tierra met Eddy at one of his many musical performances in his band “Deceitful Device” when he made fun of her mohawk. Tierra loved him from the moment she met him and never left his side after that.  Eddy’s first son Tygan Riley was born in 1997, his second son Maximus Edward was born in 2005, his third son Finnegan James was born in 2011, and in 2018 Rowan Phillip was born.  Eddy loved his children intensely and would have done anything for them. He was very protective.

Eddy was talented in a way no one else in our family ever was.  His website eddyhedington.com was recently created by him and includes all his incredible work and is the true essence of him and what he was proud of making in life.  Comic book lettering, scriptwriting, poetry, songwriting, screenplays, playing in multiple bands, playing numerous instruments, singing, video editing, the list goes on and on; Eddy did it ALL and did it with a passion and excellence.  He had a love and respect for vinyl records, with his massive collection always nearby.  Recently, he took up longboarding and created a group that he was hoping would introduce longboarding to more people called the “Cool Dad Long Board Brigade”. He was the creator of Grit City Comics out of Tacoma, WA (Grit City). He was successful with multiple comic book collaborations, including issue # 1 of “The Dunwich Boy’s” which he was particularly proud of, with a planned second issue for the end of 2021.

Eddy was loved deeply by his family and friends, including an online community that may never have met him in real life but is still affected by this loss.  The comic book world and the music scene lost a fantastic creator.  We lost our heart in our relationships with him as a son, father, husband, brother, uncle, cousin, nephew, and friend.

His family is requesting that you visit his website, which he put his time and effort into eddyhedington.com to view what he gave to the world and what the world lost for his future creations.  Do not let his light grow dim.  Tell people you love them as much as possible and support people’s passions and projects whenever you can.

A memorial service for those who loved Eddy or were inspired by Eddy or connected with Eddy is scheduled for Saturday August 21, 2021, at 2 pm at Sedro-Woolley Community Center located at 703 Pacific Street Sedro-Woolley, WA 98284.  Instead of flowers, please consider contributing at the memorial or to PayPal or Venmo (details below).

Eddy has left behind a wife and three children under the age of 18.  The family would appreciate any financial donations to help with the expenses, they can be given in the following ways: