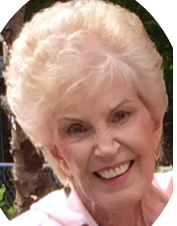 Barbara met Dean Radford Inanbit in her home town on March 1, 1958 after being introduced by Barbara’s Aunt Tressie Jones and Dean’s Uncle Williard Inabnit.  On their first date, Dean drove Barbara, Frank, Tressie, Williard, Uncle Bill and Aunt Eleanor - all in one car - to a Mexican restaurant in Corona.  After which they stayed and talked in the car as the their extended family went inside the house.  Dean then asked if Barbara would come to church with him the next day.  And so they started their journey together and  married on February 13, 1958 in San Louis Obispo and had three children, Mark, Gina and Kim.  They moved to Auburn, Washington in the summer1967 not far from Dean's side of the family and with the stunning Mt Rainier in the distance.

Barbara loved dogs and owned many Pomerianians & Yorkshire Terriers.  She loved to crochet and go to Pike Place Market for the locally produced honey.  She enjoyed playing her Yamaha Organ and making special dishes of butterscotch-chocolate pudding and fudge.  Barbara enjoyed going to the Puyallup Fair in the fall, Snoqualmie Falls in the spring and Starbucks coffee all year round with her family.  She worked at See’s Candies at Westfield/Southcenter Mall with her mother Marjorie and later got her degree in cosmotology.

Jerry Jones with many neices and nephews.

Services will be performed at Grace Church in Auburn Washington with