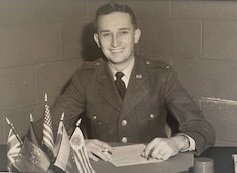 John Joseph Sanders, 94, of Olympia, Washington, passed peacefully from this life due to illness and old age on his birthday, April 14, 2021, at Madigan Army Medical Center, Tacoma, Washington.

He was born on April 14, 1927 in Duluth, Minnesota, to Alton B. Sanders and Wilma Dorothy Halva. Following the death of his father, his mother married Dick McMahon, who had two boys, Kenneth and Don. Most of his formative years were spent on his stepfather’s farm, and he often described himself as just “a simple farm boy from South Dakota”. He would fondly recall how fast he and Don were at bucking hay, even as little kids. His belief in the importance of hard work, dedication, endurance, and doing things the right way came from his rural upbringings.

He graduated from Flandreau High School in 1944 and enlisted in the Army just before the end of World War II. After the war ended, he attended college at the University of South Dakota and received a BS in Business Administration in 1950. In January, 1951 he enlisted in the United States Air Force and attended Officer Candidate School that same year. He attained the rank of Captain and began a 25-year career in the service as a finance comptroller. He additionally served as part of the Inspectors General (IG) team inspecting underground missile sites throughout the United States. He never could recall exactly when he acquired the nickname “Sandy” but it was at some point in his military career.

In 1950 he married Nadine Ellen Winters and his daughter, Sylvonna Laurie Sanders was born in 1952 while he was stationed near Syracuse, New York. During his career in the service, he attained the rank of Lieutenant Colonel, and travelled all over the globe, including stations in Labrador, Guam, and Taiwan. While in Taipei, he met and later married Lynda Kay Kinsey, and adopted her son Michael.

Upon retiring from the USAF in 1970, he relocated his family to Window Rock, Arizona where he served as a financial consultant to the Navajo Nation. During that time, Lynda gave birth to their son, John Andrew in 1971. The family later moved to Tempe, Arizona where he worked as the Maricopa County Hospital Administrator in Phoenix.

He retired in 1980 and enjoyed life in his desert oasis until, going the opposite direction from most retirees, the family moved to Olympia, Washington in 1980. As the webs began to grow between their toes, they bought a small RV in which they had many adventures exploring the scenic beauty of the Northwest, as well as excursions to South Dakota, Arizona, and Canada. He loved to garden and planted fruit trees, flowers, and vegetables. If you were to come by at a certain time in the summer, you would leave with fresh zucchini whether you wanted it or not! He did volunteer work every year assisting the elderly with tax preparation, and along with his wife, served as a County Election Official in Thurston County.

His final years were spent in his favorite recliner listening to the news, watching Westerns, bantering with his stockbroker, and reading novels – often at the rate of a book a day.

His passing was Hollywood-scripted and near perfect as his final moments were with his son, John, his daughter, Sonna, and his friend, Dr. Katherine Bruce – all were touching him and soothing his soul for his next journey. In a final act of endurance and his pioneer spirit, he waited to depart until his 94th birthday. The Madigan Army Medical Center doctors, nurses, and staff cared for him during his final days with incredible dedication and compassion, and with an added layer of concern because of his rank and military stature. After death, he was cleaned and laid in a special gurney draped with the American flag. He was wheeled to his destination while the sixth floor stood at attention as did every service man and woman all the way down to the first floor. A very heartfelt and special thanks of gratitude go out to the Madigan staff and all the Armed Forces for their dedication and belief in that brotherhood.

John was preceded in death by his brother, Kenneth McMahon and wife, Lynda Kay Sanders who passed away on February 25, 2021 in Olympia, Washington.

He is survived by his daughter Sonna, his two sons Michael and John, and seven grandchildren.

As per his wishes, his body was cremated with no immediate service. He and his wife will later be buried at Tahoma National Cemetery. They will be interred with a military ceremony limited to only immediate family and close friends.

In lieu of flowers or cards, please donate to a homeless shelter or enjoy a nice meal with a loved one. He would appreciate that.

He will be missed….