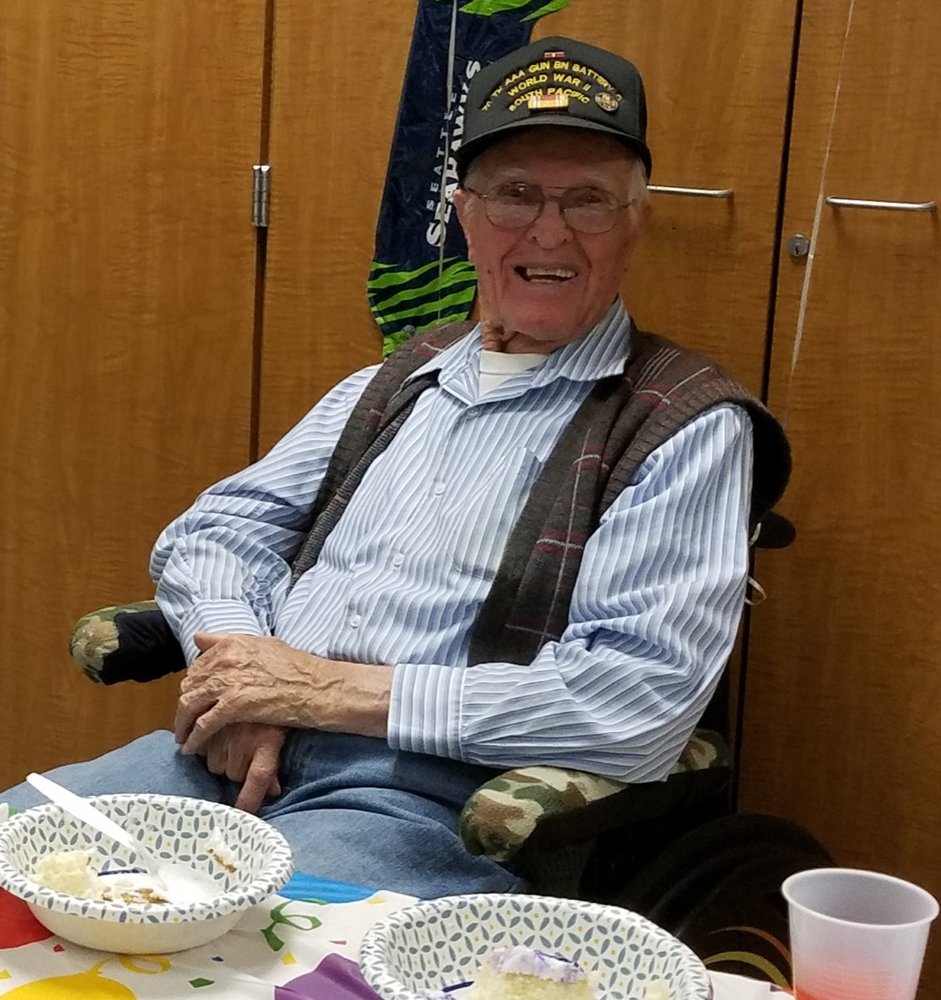 Aulney passed away on Saturday, January 2, 2021, at 101 years old at the Washington Soldiers Home in Orting, WA. Aulney was born in Stanton, Kentucky, in 1919. As a young man, he worked in the tobacco fields in Kentucky. In 1936, at age 17, he left home to join the Civilian Conservation Corps during the Great Depression and served until 1939. He was stationed in Fallon, NV at Camp Carson River and later with Company 2551 Camp Shelby, Shelbyville, KY. After the CCC’s he eventually landed out west working in logging camps near Forks, WA, in the early 1940s, where he met his wife of almost 75 years, Verna (1921-2018). Shortly after meeting Verna, WWII called. He was sent to combat in the South Pacific and served with the 70th AAA Gun Battalion Battery C. He received four medals, including the Philippine Liberation Medal. After the war, Aulney returned to the Pacific Northwest. He worked 30 years with the Washington State Highway Department, where he retired from in the 1980s. After retiring, he continued to work as a security officer well into his 80’s much of the time on the tide flats at a Weyerhauser property. He was a long-standing member of the Immanuel Baptist Church in Tacoma, as well as an active member in the local Masonic Lodge. Aulney and Verna had three daughters, Candy (2018), Pamela (2014), and Michelle. During Aulney’s long life, he spent time with his seven grandchildren, fifteen great-grandchildren, and six great-great-grandchildren. Aulney “grandpa” was always willing to lend a helping hand to his family, friends, and neighbors. When times were tough, grandpa would come to the rescue. Grandpa enjoyed working in his garden growing garlic and tomatoes. He loved working his bees, and the family would always laugh at the odd color he would paint the home and his talented way of making electrical boxes out of tuna cans, all the money savings techniques from growing up in the Great Depression. He was the strongest man we have ever known, and we are proud to have had him as our father and grandpa. We are eternally grateful for the love and wisdom he shared with us. All of his family and friends will deeply miss him. Please donate to the Washington State Soldiers Home Welfare & Betterment Account or Sunny Skies Animal Rescue in lieu of flowers.

To send flowers to the family or plant a tree in memory of Aulney Brown, please visit Tribute Store
Print
Share A Memory
Send Flowers