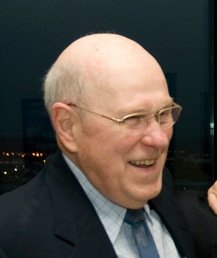 Bill, born October 3,1934, in Coshocton, Ohio, passed on August 25, 2020, in Tacoma, Washington at home surrounded by loving family. He is survived by his wife of 60 years, Helen (Smith). Bill’s mother and father were William Charles Abbott and Katherine Marie (Huff) Abbott. His paternal grandparents were Charles Walker “Doc” Abbott and Lucy (Greene) Abbott. His maternal grandparents were Oscar Huff and Ida Lenora (Eckert) Huff. Bill was the oldest of four boys. Brothers Daryl and Jim preceded him in death and he is survived by his remaining brother Charlie. Bill and Helen have four children; Jay, David, Holli and Ken and nine grandchildren who will miss him greatly.

Bill grew up as a farm and factory worker. The year after high school he worked full time in a filling station while carrying 17 class hours (chemistry) at Marietta College, Ohio on a full scholarship. By a previous competitive exam he received an appointment the next year to the US Naval Academy, Annapolis, Maryland, graduating in 1957.

He reported for flight training in Pensacola, Florida, receiving his wings in 1959 at Beeville, Texas. The Navy sent him directly to Crusader College in Mountain View, California, where he learned to fly the supersonic fighter, F8U Crusader. He racked up 192 carrier landings in two cruises on the USS Midway in the South China Sea (1961-3), and was one of the first aviators to land the Crusader aboard ship at night. During this time he was away from his wife and new-born son 17 out of 20 months. That was enough, so he determined to resign.

The Navy thought otherwise and refused his resignation due to the Cuban missile crisis and sent him to VT-23 at the Advanced Training Command, Kingsville, Texas, to instruct fighter tactics and gunnery. He enjoyed this immensely. Less than two years later, the Navy sent him to the Navy Postgraduate School in Monterey, California where he graduated in 1968 with a Masters in Chemistry. He also became an Ordnance Engineer with an understanding that he would be able to continue to fly which remained his first love.

He reported to Navy Ordnance Station, Indian Head, Maryland, as a liaison officer. In this position he rewrote the base instructions, was investigator for the “blows” at the Pilot Plant (new propellants), and set up a firing range in the ocean along the coast for a new experimental round. To get a helicopter to carry the spotter for the testing of these experimental rounds, he filled in as the second pilot in helicopters from HMX-1, the presidential squadron out of Quantico, and from the Navy Test Pilot School at Patuxent. On one occasion, due to this experience and through his contacts, he was able to call in an HMX-1 helicopter to land on the golf course next to the Ordnance Station dispensary to transport a man to a burn center, saving his life. The man was severely burned due to a “blow” in a building that was filled with black powder. During this time, Bill continued to practice his first love of flying by continuing proficiency flights out of Andrews AFB.

When Bill filled in for the Safety Director at Indian Head for about eight months, the Captain of the base recognized his ability and transferred Bill to lead the Management Department for the remainder of his tour. In a twist of fate, about this time, Admiral MacNamara had 73% of Bill’s USNA class of 1957 passed over for Commander, including Bill.

From Indian Head, he was transferred to the Navy Ammunition Depot, Crane, Indiana, as the Assistant Ordnance Officer. He had to drive to Glenview, Illinois, on weekends to get the flight time he enjoyed so much. He was there one year when a “blow” at the base at Hawthorne, Nevada, killed three people, and the Ordnance Officer was invited to retire. They sent Bill there to be the new Ordnance Officer, a position usually assumed by a full Navy Commander.

About eight months into his tour at Hawthorne, 20 boxcars of bombs produced at Hawthorne blew up the town of Roseville, California, after the train had descended a long grade and stopped. The Captain and Executive Officer were not on base; whereabouts unknown. Nor was there a Public Affairs Officer. Bill, next in line, sent the EOD Team and 12 ordnance workers to the scene, and answered the phone from all the newspapers and senior officers from Washington. In the afternoon a senior ordnance engineer called. From his experience with jet aircraft brakes, Bill knew that the cause of the accident was hot brakes on the boxcars, which also had wooden, oil-covered bottoms. With the bullseye on Bill’s back, at least twenty investigative teams descended upon Hawthorne. Upon thorough investigation, the Navy exonerated all Navy personnel from any wrongdoing at the subsequent trial. Bill’s extraordinary response to this tragic incident resulted in Bill’s well-deserved promotion to Commander. Unfortunately, about the same time, the Navy determined Bill no longer needed to fly. Bill’s flying came to an end.

From Hawthorne, Nevada, the Navy sent him to the Joint Conventional Ammunition Project, to help coordinate the armed services in the national production and storage of conventional ammunition. It took Bill’s leadership a year to establish trust and confidence among the services, but as usual Bill succeeded and saved the government an extraordinary amount of taxpayer money. To Bill’s chagrin, the Army took over this responsibility, to include three Naval Ordnance production bases. As an additional result, the Navy cancelled Bill’s ordnance engineer job position. This concluded Bill’s Navy career with twenty years of honorable service to his country.

He moved his family to Tacoma, Washington, to attend the University of Puget Sound School of Law (now Seattle Univ). During law school Bill worked as a process server, a title company examiner, and bailiff for a superior court judge. After passing the bar, Judge Brown sent him to George Marsico’s office, where he was happily accepted as a fellow attorney office-mate and began his independent practice. At first Bill took any case that walked in the door. Later, Bill concentrated on bankruptcy and family law. He also spent time as a county family investigator, mental health defender, and filling in as a Municipal Judge which he enjoyed greatly often with humor and even more often with judicial mercy. He moved his law office a couple times and closed it after twenty years of honest legal services to clients, some of whom paid him with eggs. A failing heart contributed to this decision. An indication of Bill’s service to his clients was that he never had a malpractice complaint recognized by the bar.

Bill’s hobbies had always been sports. His joints and heart gradually curtailed these activities, so he took up writing. He has seven fictional books available on Amazon and one nonfiction, his autobiography, Opening the Candy Store.

Bill was a 1952 graduate of Conesville High School, Ohio and he maintained close friendships with many of his classmates. He was proud of his honorable Navy service to his country. He greatly enjoyed membership in many groups to include the Elks, writing groups, reading groups, the Cascadians, the Fridayalopians, and the Tacoma Police Department, where he was a volunteer. He’s most proud of his children and grandchildren, who are successfully achieving their goals and leading solid, fruitful lives.

To send flowers to the family or plant a tree in memory of William Abbott, please visit Tribute Store
Print
Share A Memory
Send Flowers