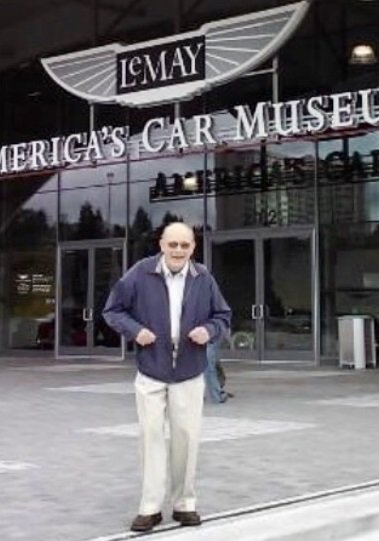 On Wednesday, July 29, Kenneth Sloan, loving husband and father of three children and six grandchildren, passed away at the age of 84 after a long battle with Alzheimer’s disease.

Kenneth Sloan lived a full life most people dream of. His passion for cars allowed him to be a fierce competitor in racing for over a decade throughout the 60s. This passion and a solid foundation for hard work gave fruition to a successful career in the automobile industry. His enthusiasm for cars shined through his work and he could explain every detail about a car from fender to fender to any customer, earning him the name “Square Deal Sloan”. He collected many antique cars over the years and won many trophies at car shows. Ken supported his family selling cars for over 40 years, told stories to anyone who’d listen, and loved cars almost as much as he loved his family.

Ken was born in Camden, NJ and raised in Moorestown, NJ by his parents, Charles Fletcher Sloan, and Helen (Sharp) Sloan. His uncle, Arthur Sharp, was an influential mentor in his life, who inspired him to go into the automobile business. While Alzheimer’s stole many of his later memories, he was able to recall his childhood times in great detail, including times spent on his grandparents’ farm in Mt. Laurel, NJ with his many cousins, hilarious adventures with Uncle Arthur, and hijinks at school with his best friend.

He went to college at Rutgers University in NJ, and then worked with his Uncle Arthur to open car dealerships in New Jersey, New York and Pennsylvania. During this time, he raced cars with the Sport Car Club of America along the East Coast. His favorite track was Lime Rock Park in CT, where he could specifically recall every twist, turn, and straightaway. Ken’s mix of quick thinking, calculated risk, and driving with reckless abandon won him dozens of trophies and as many “did-not-finish”. One race earned him a spotlight in Lime Rock Magazine in a classic photo of him losing a wheel on the Big Bend.

After a waitress spilled eggs on his lap in Ocean City, NJ in 1957 he decided to marry her. Bobbi and Ken dated for 10 years before getting married in Philadelphia in 1967. They lived in Annapolis, MD, Crofton, MD, Alexandria, VA, and eventually moved to Ramsey, NJ, where they raised their three children and lived over thirty years.

Ken’s spirit led him down the path of adventure. He owned boats, sailed, jumped out of planes, and of course, raced cars. As life went on, his sense of adventure continued, leading him on canoe and boat trips which led to more than one mishap, including the almost sinking of a boat with his son onboard. During his retirement, he and his equally adventurous wife, Bobbi, toured the states in an RV. Despite him driving the 33-foot vehicle as a giant race car, Ken and Bobbi spent a few more years together touring North America. He tried to visit as many Native American reservations as Native American culture and issues were always important to him.

Ken was a wonderful father, who also became a cook out of necessity since he grew tired of Bobbi’s culinary skills (or lack thereof). On their anniversary one year he asked her, “Where would you like to go?” She suggested, “Someplace I’ve never been before.” He replied, “How about the kitchen?” Their tit-for-tat relationship provided a fun-loving environment that lasted for 53 years of marriage.

Their adventures continued as they moved from Ramsey to Driggs, ID to follow their children who were all living near the Grand Teton mountains. Driggs was home for many years until it was time to uproot one last time to Gig Harbor, WA to live close to where all three children eventually settled. Ken was able to spend the last twelve years surrounded by his family and all his grandchildren who provided new ears to hear his countless stores of cars, adventures, and more cars. Many holidays were spent listening to him sing acapella versions of his favorite song, “Katinka” which ended up a singalong where no one knew the words but Ken.

He has passed on many life lessons, including: when you meet someone, look them directly in the eye and shake their hand, preferably until the bones break; when merging into traffic, go fast and ‘throw ‘em a fender’; break going into the turn and gas it on the way out; try something that’s scary because it will ‘put hair on your chest’;  and ‘there’s a place for everything and everything in its place’.

Kenneth Clark Charles Sloan, Date, Square Deal, Captain Dish, Kenny C, Pop Pop, is survived by his wife, Barbara Sloan; his children; Gretchen Sloan, Tamara Sloan Ritchie, and Matthew Sloan; his grandchildren; Grace, Violet, Jake, Lucia, Reggie, and Willy; his sister, Geraldine Suleta, and many cousins, nieces and nephews, and friends who will all miss his sense of humor, smiling eyes, and his endless stories, which were mostly about cars.

The family is planning a small, family memorial Tuesday, August 11 at 2:00 pm (Pacific Standard Time). Due to COIVD-19, we will be streaming the memorial via Zoom.

We hope to hold a larger gathering once we can all get safely back to the East Coast.

In lieu of flowers, the family requests donations be made in Ken’s name to either of the following charities:

Lime Rock Park is honored to have the Alzheimer’s Association, Connecticut chapter as its 2020 Official Charity. In addition to fundraising for the organization throughout the year, Lime Rock will host the Northwestern Connecticut Walk to End Alzheimer’s on Sunday, Oct. 4, 2020. https://limerock.com/officialcharity

As Ken was always interested in Native American culture and causes, and his wife and children are educators. This fund would be a meaningful way to honor his legacy.