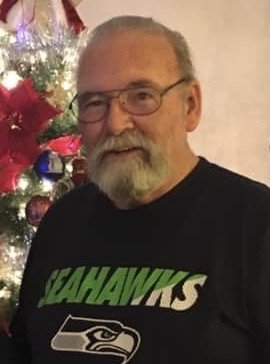 After his battle with Diabetes and Parkinson Disease, Larry Jay Benbrook passed away at the age of 76 on May 11, 2020, in Port Orchard, WA.

If you asked a hundred people who Larry Jay Benbrook was, they would likely give you a different story. A sailor. An entertainer. A cowboy. A car enthusiast. A fisherman. A card shark. A savvy businessman. Regardless of which hat he wore; Larry never knew a stranger. He was a man of compassion, an immediate friend to all he met; and no matter the occasion, Larry always had a lively story or a silly joke to share.

Larry was born to Joe Donald and Betty Jo (Myrick) Benbrook on April 22, 1944 in Tulsa, Oklahoma. His family relocated to Lakeview, Lake County, Oregon when he was just a toddler. He shared his childhood with his younger sisters, whom he had adored, and graduated in 1962 from Bernard Daly High School (now known as Lakeview High).

Soon after graduation, Larry enlisted in the U.S. Navy where he served as a Radioman in the Pacific Fleet during the Vietnam War. His brief naval career took him to faraway places, including the Philippines, where he met and married his first love. Together, they had a son and daughter, but later parted ways.

Larry was an ambitious, clever, and talented man. Following his service in the Navy, Larry returned to Jackson County, Oregon where he owned and managed a variety of successful businesses over the years, including grocery stores, automobile and RV dealerships, card houses, and successful real estate brokerages. Larry had a special gift of bringing people and deals together.

Regardless of his commitment to business endeavors, Larry also embraced the many adventures that life had to offer. He earned a pilot license and flew his own planes, he chartered his own fishing boat, and he even managed a horse ranch for a short stint. Oh boy, did he wear his cowboy hat well. One of his proudest achievements, however, was sharing his passion for music when he wrote and recorded the songs, “Hilt” and “It’s Good to be Home” in the mid-70’s.

In his later years, Larry met Judy A. Miller, while residing in Crescent City, California. They married and relocated to Vader, Washington. For several years, they enjoyed taking long drives, visiting antique stores and pawn shops, playing the slots, and watching sunsets from their back porch before Judy sadly died of a stroke.

Following Judy’s passing, Larry settled into the Garden Club Retirement Community in Bellevue, Washington for a short time. Then spent his final years at the Washington Veterans Home in Port Orchard, Washington. In both communities, Larry’s charisma, kindness, and charm earned him the unofficial title of “social director”. He led special committees, competed in bowling tournaments, played many hands of pinochle, loved his weekly Bingo games, performed in talent shows, and enjoyed frequent outings with the other residents. He created many fond memories with friends and caregivers.

Larry is deeply missed and will live on in our hearts forever. But we take great comfort in knowing that he is now rejoicing with our beloved God in Heaven, strumming his favorite guitar, and singing alongside loved ones lost ahead of him. Rest in peace, Larry.

You are invited to leave your condolences online at the Edward's Memorial Funeral Home website. You are also encouraged to share your special memories and photos of Larry.

Due to the concerns regarding Covid-19, Larry’s memorial service will be postponed and announced later.

To send flowers to the family or plant a tree in memory of Larry Benbrook, please visit Tribute Store
Print
Share A Memory
Send Flowers