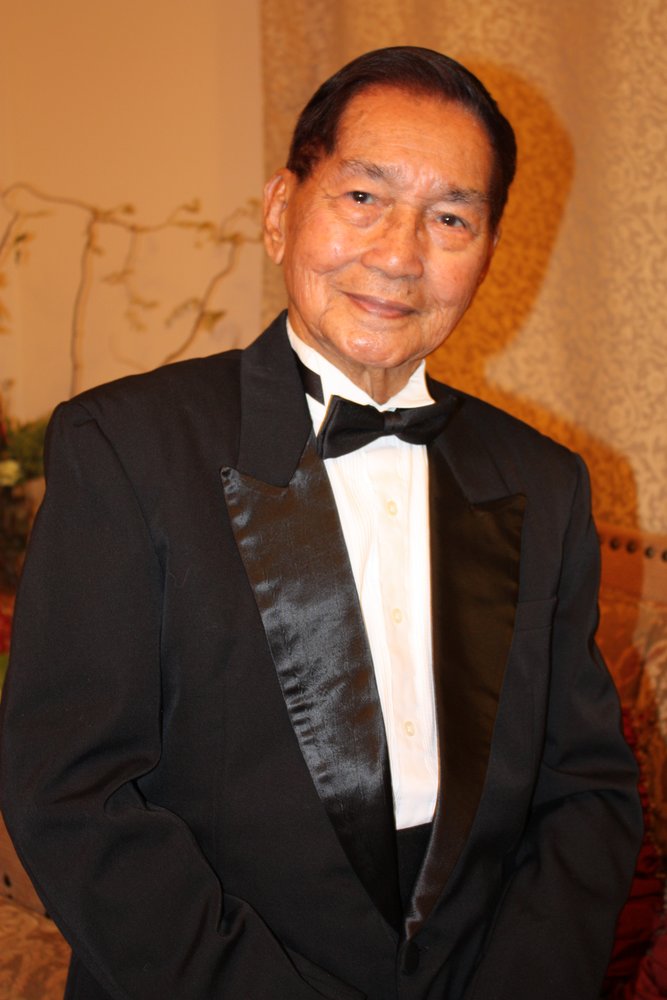 Ruben “Daddy Ben” Del Rosario Toledo Sr was born in Kawit, Cavite, Philippines on February 4, 1926. He peacefully went to heaven while surrounded by his loved ones, in Puyallup, WA on March 9, 2020, at a young age of 94. Yes, we said “YOUNG,” because even during the days leading up to his last breath, his wits were so quick, he would make us laugh all day with his jokes and silly remarks just like a 30-year-old comedian in his prime. His memory was so amazingly sharp that someone in his 20’s would be jealous as he would tell stories that happened 50 years ago with details like the exact names, addresses, and even which floor the event happened! And of course, that smile! A smile as genuinely sweet and heartwarming as a pure-hearted innocent little kid! So yes, for us who were blessed by his presence, 94 was still too young.

He is survived by his loving and devoted wife of 47 years, Soledad Toledo, his four children and their spouses, Ruby Aundree and Gil Avanzado, Cindy and Robert Villanueva, Ruben Jr. and Tess Toledo, and Pinky Gomez, his adopted son Ronald and his spouse Vilma Toledo, his eight grandchildren, Kevin and Josh Leonor, April and Alexa Villanueva, Ruben III and Geneva Toledo, Nathan and Troy Gomez, and his adorable nine great grandchildren.

Daddy Ben lived quite a life. If we were to write a book about it, it would be in volumes and would cover all genres from action, suspense, rom-com, tragedy, comedy, a beautiful love story, parenthood, friendship, spiritual, politics, and perseverance, all leading to one of the greatest success stories!

The first born of the late Agapito and Fortunata Toledo, he was the eldest of nine siblings. Daddy Ben wholeheartedly took on adult responsibilities to help his parents out in his early teens. During lunch break from school, he would come home while his father was working and his mother was cooking, and he would clean the house or wash his siblings’ clothes by hand. He would then grab a quick bite and walk back to school. Being the eldest of the nine, his siblings called him “Kuya Ben.” Growing up, some of his siblings may have considered him a strict brother, but he was simply a young lad, forced by situations to become a man quickly. He loved his brother and sisters so much that he would do anything to protect them.

He was a World War II veteran, joining the TANIB unit (Tagapagtanggol Ng Inang Bayan, meaning Defenders Of The Motherland) at the age of 16, making him the youngest member of the guerrilla outfit that was heavily engaged in the underground resistance movement during the Japanese occupation of the Philippine Islands. He had a few close calls where he could have easily been captured or killed whenever the Japanese would raid their area. He would first protect his mother and his siblings, by putting them in a place where they would be safe and secured, often disregarding his own safety. We thank You God for blessing Daddy Ben with impeccable survival skills as he managed to outsmart the enemies time and time again!

For his valiancy during the war, he was awarded a four year scholarship by the Philippine Veterans Board where he went to the University Of The East in 1951.  However, in 1953, Daddy Ben pursued his military career and joined the U.S. Navy. He retired from the service in 1973 as a Chief Petty Officer, veteran of the Korean and Vietnam wars, and received numerous medals and commendations for his meritorious services in the Navy along the way. He later finished what he started and went back to college after his retirement from the service and earned his Bachelor of Science Degree in Commerce as a Cum Laude graduate from San Sebastian College in the Philippines.

Royal Savings Bank, a financial institution in the Philippines, took notice of Daddy Ben’s character, perseverance, intelligence, and charisma, and offered him a position to manage one of their branches in the Cavite province. He enthusiastically accepted and took on the new challenge. He was so good at what he did that in just a matter of months, he was promoted to become the Area Manager, handling all of the bank branches in the province of Cavite. He was beloved by his employees, and created a fun, friendly, and a family spirited atmosphere at work. They called him “Man-ger”, which was so fitting, because he was a Man of integrity first, and that’s how he managed people and situations.

Daddy Ben was a God-loving man, a believer of Christ. He was a constant figure at church, a sought out member of the Cursullistas, a very active participant of every church activity, and no matter how hectic his schedule was, he never missed a Sunday service. He just wanted to live a life that was pleasing to God, and that he did!

As a friend, he was known to some as “Ka Ben” from his radio hosting days. (Yes, he did that too!)  But most of them simply called him “Ben.” Ben was a loyal and generous friend who would go above and beyond to help somebody. Whether you were a lifelong friend or a complete stranger, he would sit down and listen to your problems, and no one left empty-handed. You either parted with great advice, much needed wisdom, or financial help in your pocket.

As a husband, he was first married to the beautiful Belen “Mommy Belen” Pangco in 1957. Ruben Sr. had 4 children, Gina (deceased), Ruby, Cindy, and Ruben Jr. with his wife mommy Belen before losing her to cancer in May of 1971. Knowing the struggle of being a single parent to three little kids, God blessed him with what turned out to be the perfect woman who  would love and take care of Daddy Ben for the rest of his life, and that she did! A woman who would love his three kids like her own, all the way down to grandkids and great grandkids. A woman whom we believe mommy Belen proudly and happily approved of from the start to take her place when she went to be with her Creator, this special and just as beautiful woman is Soledad “Mommy Oly” Santonil from Sta. Isabel, Kawit, Cavite, Philippines. Daddy Ben and Mommy Oly tied the knot on June 10, 1972 and bore a child named Pinky. Daddy Ben was a loving, devoted, and faithful husband, who never failed to make his wife feel safe and protected.

As a father, we could not have asked for any better. He had a perfect balance of discipline and compassion. Growing up, as busy as he was, he always made it a point to be there for us when we needed him. He never missed one single milestone in our childhood. When we grew into adults, he loved and supported us with all of our dreams, and he let us fly all the while watching us and secretly guiding us to get to where we wanted to go. And when we made mistakes or did not follow his advice, and felt like we had failed so many times, one thing was constant - when we looked up, there he was with open arms to lift us back up. He never placed blame, no “I told you so,”  no abandonments, just words of encouragement and love...lots of love. He truly gave us his unconditional love. Never asked anything from us. Just knowing that we were okay, he was happy.

As a grandpa and great grandpa, he showed so much love in his own ways and somehow produced an unparalleled balance of fun and dignity! They loved being around him not only because he was so much fun to be with, but they also felt a certain pride just learning about their Daddy Ben’s journey in life all the way to how he carried himself down to his last breath.

Daddy Ben loved entertaining. He was a great dancer whom you’d always find leading the line dances. He also loved to sing and sang every song with joy. He was a true performer. His massive collection of music, from Engelbert Humperdinck to Beyoncé, showed his open-minded appreciation for tunes of different genres. He loved sports, watching the Olympics, boxing, basketball, tennis, and he loved the Seahawks. He could not sleep without his Seahawks blanket. Daddy Ben loved life so much that it was rare to see him without either a camera or video camera in his hand because he wanted to not only capture all of the special moments, but also relive them by rewatching all of the events on his tv. Daddy Ben had many passions but the two things that he loved the most were God and his family. Daddy Ben prayed...and he prayed.... and he prayed...and Daddy Ben loved....and he loved....and he loved.

This tribute does not justify even a fraction of what this man’s life on earth was really worth. Ruben D. Toledo Sr. was a perfect picture of the word “Integrity.” He touched a lot of people's lives in his own little and big ways. And whether you had called him Ruben, or kuya Ben, or Chief, or Man-ger, or Ka Ben, to us, he was simply “Daddy Ben”.... the perfect man....who showed us how to live...love...laugh...and dance. In our family’s eyes and hearts, he truly was and always will be... THE GREATEST SHOWMAN ON EARTH!!!

Thank you Lord God, for sharing us Your perfect creation. And now, we are happy to offer you back the glory and the honor of this perfect creation of Yours, Ruben “Daddy Ben” Del Rosario Toledo Sr. We are excited for him to put on a heck of a show up in heaven and be reunited with You, Lord God and all his loved ones who had been patiently waiting for him.

Daddy Ben, just as your last few words on earth, we say back to you....THANK YOU AND WE LOVE YOU SOOOO MUCH!!!

Your love and your legacy will live forever. Until we meet again.