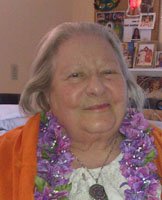 She is elated and in bliss - - free of her worn-out physical vehicle. She was 94.

We also were happy for her because it happened so smoothly and harmoniously.  It happened with no suffering or any incidents prior. She just left in her sleep around 6:00 AM, March 4, 2020.

Mom “Mikki" was born near Atlanta, Georgia, and raised in Atlanta. My father was from Philadelphia. They met in Cheyenne, Wyoming, while in the Air Force. They married in 1952 in San Antonio, Texas, and went to Mexico for a honeymoon.

I was born in 1954, and lived in six different U.S. states plus Newfoundland and Germany, while growing up, because my father was transferred frequently in the Air Force. While in Germany, we toured several other countries in Europe. Mom was a homemaker, and I was an only child. She and Dad showered love on me, and they stayed together with each other, so we were blessed with a strong family love bond.

Mom was raised in the Baptist church and Dad was raised in the Methodist church, but they both switched to the Church of Christ when I was about seven, so I had about seven years of deep experience in the spirituality of a fundamentalist religion.  We had wonderful gift-giving and fellowship at Christmas every year.

Then in the early 1970s, all three of us opened up more to the truths of metaphysics and all religions and spiritual paths. I started Transcendental Meditation in November 1973, and Mom and Dad followed two weeks after I did. They loved it.

Dad retired from the Air Force, and began a new career in the U.S. Civil Service. Mom continued to be a homemaker. They moved to Colorado Springs in 1969 and to Lakewood, Washington, in 1979.

All my friends who met my parents used to tell me how lucky I was to have parents like them, because Mom and Dad were so genuinely loving and virtuous, and were so expanded and all-encompassing in their appreciation of the world’s enlightenment traditions.

Mom did not have a business or career, and so stayed at home most of the time. She socialized less and less over the years due to sleeping a lot, and mainly kept house, read books, and meditated. She enjoyed going for walks in parks with us and our dog, and dining out. She lived a simple life.

When she did socialize, people always loved her sense of humor, her dry wit, her openness to embracing the truths of high spiritual phenomena, and her genuine love and appreciation for people. She only befriended small numbers of people, but the people she did befriend were loyal and lasting in their friendship.

Dad made his transition in 2008, much sooner than Mom.

She had a stroke in 2013, and spent four years in a nursing home in University Place, which is on the west side of Tacoma, Washington. She amused us by telling the other patients that the ETs are coming . . . so “don’t worry, their advanced technologies will heal you.”  Well, such things may well indeed come to pass sometime in the future, but they didn’t in her lifetime, alas. Nevertheless, she was a bright light of hope and inspiration for all around her. She spread laughter and happiness around her.

After the nursing home, at the beginning of 2017 we finally got Mom moved to a heavenly private adult family home in Gig Harbor. It is in a beautiful, clean, spacious, well-equipped house in the woods across from a small farm with goats in the field. It is like one of those Thomas Kinkade paintings. And the Kenyan care staff were soooooo loving to her. We were so happy that Mom got to spend her last three years in such a wonderful place. She was extremely well cared for.

On the morning of March 4, 2020, after hearing the news, we had a quiet prayer and meditation ceremony, and sent waves of Love to her, congratulating her on her freedom . . . and encouraging her onward to the highest Plane of LIght with which she can resonate.

She lived a fulfilled life. We have no regrets.  In the last year or two, her speech became so slurred from the stroke that we couldn’t understand her. This made conversation very difficult. And she stopped reading books in 2019. So life wasn’t much worth living anyway, much longer, in that body.

We know she is extremely happy right now . . . in awe of the Light . . . and in awe of her freedom, lightness, and joy.  She can see, hear, and understand clearly now.  She is with my father and the angels and all the other loved ones.  She is in heaven.

May you live deep, fly high, and be well. Stay on key and in tune.

To send flowers to the family or plant a tree in memory of Mildred Freeston, please visit Tribute Store
Print
Share A Memory
Send Flowers