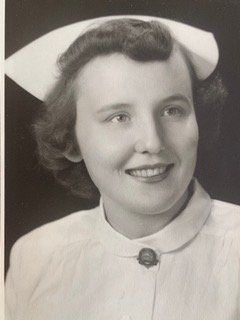 June Lois Whitaker (née Wark) was born in Bellingham, WA to Gladys and Roy Wark on June 18th, 1932. She passed away on October 2nd, 2019 at the age of 87, preceded in death by her husband of 60 years, Perry Lewis Whitaker. June is survived by her three children, Debra Sue McBride (Rodney), Cindy Amato (Tim), and Linda Cohen (John), as well as by one brother, James Wark of Pleasanton, CA.

June spent 32 years as a nurse after graduating from Good Samaritan School of Nursing in Portland, OR in 1953. Following her graduation, she worked for Cowlitz General Hospital and then moved to Hawaii where she worked as a nurse and met and fell in love with her husband, Perry, who was stationed at Schofield Barracks. They were subsequently married on the island of O’ahu before moving back to Washington state, where she continued her nursing practice. Before Perry’s retirement in 1967, their family was stationed at various military bases in the United States and Europe. June and Perry then raised their daughters in Lakewood, WA. In 2003 they purchased a home in the Northwest Landing development of DuPont, WA, where they lived the remainder of their lives close to their daughters and enjoying precious family time.

After retiring from nursing, June enjoyed work as a freelance writer for various newspapers and magazines. In her free time, she was an avid reader and particularly enjoyed mystery novels. June loved her family, and she loved the ocean. Some of her fondest memories were spent on the beaches of Hawaii, and with her family vacationing along the Pacific Northwest coast.

Those who knew June will remember her for her compassion, wit, and unique sense of humor. We are comforted by the thought that she is out of pain and reunited with her husband Perry, as well as the many family members that went before her.