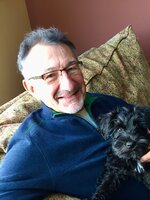 Nick Rossetto passed away peacefully on September 9, 2022 at the age of 80. Nick was born in Red Lodge, Montana and graduated from Billings Central Catholic High School. Nick attended Seattle University, married in 1962 (Cris) and was father to four sons. After graduating from Seattle University Nick proudly served in the Army, 101st Airborne. Nick eventually landed in Tacoma to begin a lifelong career in concrete construction. He was proud of the companies he created, the people he worked with, and the opportunity to work with his sons throughout his career.

Nick was an avid fisherman, always longing for the solitude of a day fly fishing a Montana river. He also became quite the chef and baker, blessing family and friends with his famous seafood chowder and homemade biscotti. He spent his free time tending his beautiful yard, riding his Harley Davidson motorcycles, or walking the Tacoma waterfront with his beloved dog companions.

Nick will be missed for his sense of humor, laughter, and dedication to his family.  A Celebration of Life will be held on Friday, October 14th starting at 11:30AM at the Tacoma Elks Allenmore Events Center, 2013 S Cedar Street, Tacoma, WA 98405.