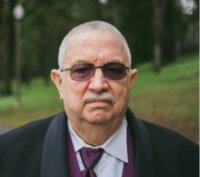 Charles Michael (Mike) Simmons, an Army Veteran and lover of music, died unexpectedly on June 13, 2022, at the age of 73.

Mike was preceded by his mother and father and is survived by his wife Marilyn (Curtis); his brothers Richard (Janet), Curtis (Bunny) and Randy (Glynnis), and his children, Matthew, and Christopher (Linda), and his many grandchildren.

Mike was born in Hartville, Missouri on August 17, 1948, to James and Imogene Simmons. Mike attended 2 years of college and later graduated from Lakewood Covenant Seminary in Lakewood, WA with an Associate of Theology Degree. He was a member of First Baptist Church of Lakewood for many years as well as Trinity Baptist Church and Lakewood Baptist Temple where he worked with the Spanish ministry. Mike loved collecting matchbox cars and music. He became efficient on the piano and guitar. Mike joined the army in 1967 after high school and served in Viet Nam and Germany. Due to Agent Orange health issues, he was medically discharged in 1984. He was always willing to tell a story and made friends with everyone. Mike loved to practice his Spanish or sign language with any takers. This kindhearted husband, father, brother, and friend will be missed. We know he is celebrating in heaven with his father and mother and other friends.

In lieu of flowers, please donate to First Baptist Church of Lakewood, Benevolence Fund in the name of Mike Simmons.