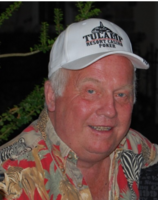 Jim died on February 4th, peacefully at home. He was 83.

Jim was born and raised in Tacoma. He attended Visitation grade school and then graduated from Bellarmine in 1957, where he met and fell in love with his childhood sweetheart, Marie Allotta; they married in 1959. He was a paperboy for the Tacoma News Tribune until he went to high school. When he turned 18 he got a job at People’s Store in So Tacoma in the display department and after he graduated he went to work at Boeing. They moved to the country and he bought a logging truck and worked for West Tacoma News Print. Eventually,he followed in his dad’s footsteps and started his own construction company which he owned and operated until retiring.

Fishing was his first love and he would ride his bike to Wapato Lake every Saturday. When he got his first car, American Lake was his destination. While other high school couples were out dancing, Jim grabbed Marie and off they went to every lake around! It was a hobby he loved to share with his family and friends. As the kids were growing up, he dug a large pond at their home in Roy, and stocked it with fish for them each year!

Jim’s pride and joy was his family and the many things they did together. He coached baseball for all the boys; the older girls were active in 4-H. On weekends Jim would load up their horses and off we would go to their events. He loved to play golf, travel, and take as many of the grandchildren along as the motor home would hold. He was blessed with the gift of art and would entertain the kids with drawing cartoons for them. He loved baseball, horse racing, flying, camping, and hunting trips and he even tried skiing. He loved his hunting dogs but especially “Stagger Lee.

We will all remember Papa for his bacon and egg breakfasts! When the grand kids would stay over he would wake them in the morning singing, “Oh my Papa” until all were around the table.

He had so many wonderful stories about his grandfather Mike and remembers when he was a little boy in North Dakota on the farm. Grandpa Mike would take him on the horse around the property and he would pretend he was a cowboy. We called him Husband, Father, Papa and Friend and he will forever be in our hearts.