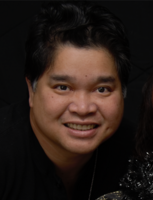 It is with great sadness that the family of John Elter "Joygi" Reyes announces that he passed away on December 10, 2021

He was born July 6, 1971 in Tarlac, Philippines to Lita T Cruz and Eleuterio Balagtas. And he was later adopted by the late Federico Reyes. He grew up strong and sturdy with five more brothers and later two younger sisters. He graduated with a Bachelor's degree in Fine Arts, majoring in Industrial Design and became a professional photographer in the Philippines.

Moving to America, he found himself working in the healthcare industry. Starting from a humble beginning, from maintenance personnel in a nursing home, he climbed up to become a billing supervisor in two well-known Hospitals in Seattle and Renton, Washington.

He loved photography, airsoft for exercise and online games. He loved his wife, his best friend, Bek Reyes, who shares his passion for art and games and growing their faith with the Lord.