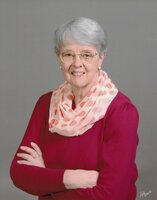 It is with sadness that the family of Jane Elizabeth (Illsley) Vernarelli announces that she passed away on Friday November 26, 2021.

She was born on March 22, 1934 in Lawrence, MA to Ferna Mae (Spinney) and Howard Keith Illsley of Nova Scotia.  She loved her New England upbringing and roots.  She moved frequently as a child, but settled in Dracut, MA for her school years graduating from Dracut Highschool in 1954.

She met her husband John Vernarelli while working as a secretary at Ft Devens MA and they married on October 21, 1961.  She loved the adventure of being a military wife and together they had two daughters.  After John left the Army, they settled in Northern VA..

In retirement, she lived in Baltimore MD, Summerville, SC and in the last five years, DuPont,WA where she was happy to be near both of her daughters and her grandchildren.

Her life-long passion was sewing and she endeared herself to many by offering her expert services to anyone in need.  She was loyal to God and served Him selflessly throughout her life.

She was preceded in death by her parents, two brothers and husband John Vernarelli.  She is survived by sisters Janet Salisbury (Steve) and Judith Ciarrocca (Richard), daughters Carla Hein (August) and Christa Lippert (Jeffery),  grandchildren AJ, Elena, Adrienne and Susanna Hein, and Sara and Chloe Lippert, as well as numerous nieces and nephews.

A memorial of her life will be held at DuPont Community Presbyterian Church, 502 Barksdale Avenue in DuPont on Saturday December 18 at 2pm.  In lieu of flowers, the family asks that donations be made in her name to SamaritansPurse.org