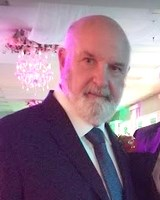 Art graduated from Fife High School in 1967 and joined the US Navy serving aboard ship during the Vietnam Conflict.  While in the Philippines, Art met Mila, who became his wife of 47 years.  During his Naval career, he was awarded numerous awards and commendations.  He retired from active duty in 1975, but continued his military service, retiring from the Naval Reserves.

He retired from Boeing after more than 35 years of service.  While at Boeing, he had the honor of working on the Unity Module of the International Space Station.  He also worked on the B-2 Stealth Bomber, the B-1 Lancer and additional military aircraft.

In his spare time, Art enjoyed bowling, spending time with family, but mostly he loved cheering on the Mariners.

He was preceded in death by his parents, Arthur Raymond and Sylva Melius, and by his wife Mila Adriatico Melius.  He is survived by his children Sheila Marie Lujan of Yuma, Arizona, Jonathan Michael and Steven Arthur Melius and Steven’s fiancée Kristine Arriola; his grandchildren Christian James Wagner, Samantha Kalyn Lujan, and Alexandra Reyna Lujan; and his sister Andrea Rae Melius of North Platte, Nebraska.  Art treasured his children and grandchildren.

Art’s remains will be interred at the Tahoma National Cemetery in Kent, Washington, with full military honors for family members.  A memorial service will be planned at a later date.