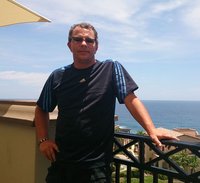 David Frederick Dearing passed away on Wednesday, July 28th, 2021 at the age of 47. David was born in St. Louis, Missouri and grew up in St. Joseph before moving to Seattle, Washington in 1986, where he raised a family and worked as an Enrolled Agent, eventually going on to run his own tax consulting business. He is preceded in death by his mother Barbara Dearing (Boyer), brother Darren Jenkins, and sister Janice Brown (Jenkins). David is survived by his father, Fred Dearing (David was his Rosebud), wife Susan Pak, daughters Briana and Allison Dearing, siblings Doug Jenkins, Julie Caldwell (Jenkins), Jodi Madden (Allen), Jill Mears (Allen), Jennifer Dearing, Dustin Dearing, grandmother Betty Dearing, aunt Ruth Ann Tate (Dearing), cousin Dana DeMarco (Tate), and many other family and friends. He loved to learn new things, and was an avid golfer and lifelong musician. He will be most remembered for his kindness and his love for his family and friends