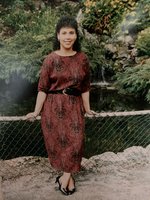 Griselda Rivera (Suren) passed away at the age of 58, March 29, 2021 to be with her Heavenly Father after battling Ovarian Cancer for almost 2 years. Born March 10, 1963, she was the eldest out of 2 daughters to Jose I Suren and Zenaida Cruz Valentin in Fajardo, PR. At a young age she made the decision to serve God and she would gladly let you know that it was the best decision of her life. After completing her high school education from Dr. Santiago Veve Calzada in 1980, she continued her studies at La Universidad Interamericana of Puerto Rico and Universidad Pentecostal Mizpa. At the age of 21, she found herself in Ft. Lewis, WA. It was there where she felt the calling from the Lord upon her life to start in ministry. She served the church as a teacher, worship leader and played the guitar. In 2001, she graduated from the Evergreen State College. Shortly after graduation, she started to work for Washington State University Cooperative Extension as a Nutrition Educator. At the same time, she felt a pastoral calling upon her life and started Communidad Cristiana. After 12 years of pastoring and teaching nutrition in the community, she relocated to Florida for a couple of years only to come back to WA, the state where she felt God’s calling so strongly in her life. Upon her return, she continued to serve God and the community she loved! She is survived by her husband Miguel A Rivera, her children Grisellies Rivera (Josué Rivera) and José G Rivera, step son Miguel T Rivera, her grandchildren Leila, Zoellies, José Jr., Jeremías, Kenzie and Sofia, her sister Linda Figueroa and niece and nephew Gabriela Figueroa and Ezequiel Figueroa. There will be a Celebration of Life on Monday, April 5 from 2pm to 5 pm at Edwards Memorial, 11020 S Tacoma Way Lakewood, WA 98499. And as she would say, make sure to take life, one day at a time!