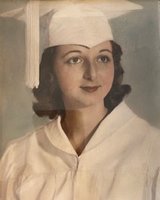 Lynda is survived by her husband, John of the family home, two sons and a daughter and 6 grandchildren.

She worked for the US government in Washington D.C., Vandenberg AFB, San Diego, Tucson, and Taipei, Taiwan.  At her death, she was a homemaker.  Lynda was a past member of the League of Women Voters, member of the Puget Power Consumer Panels, and a founding Commissioner of the Tanglewild Parks and Recreation District.

Her hobbies are music, computers, learning, and rockhounding.