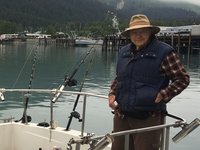 Emery J Susee Jr., of Graham, WA passed away on Sunday, May 3rd, 2020 at the age of 85. He went to join his bride, Deanne of 64 years, peacefully surrounded by those who loved him and cared for him in his later years of life.

Emery was born on August 6, 1934 at Saint Joseph Hospital in Tacoma, Washington to Emery Sr. and Christabell Susee. Emery was one of eight children and is survived by his brother Roy Susee of Roy, Washington. Emery joined the Navy at 16 years old and then in 1956 he met the love of his life Deanne. After two weeks they married and lived a long happy life together which included their two children Ricky (spouse Cheryl) of Wasilla, Alaska and Pamela (spouse Cody) of Graham, Washington. Four grandchildren Derrick, Brianna (spouse Steve), Tiffany (spouse Michael) and Cassie (Spouse James), four great-grandchildren Taylar, Aerissandra, Cayman and Korbyn, who he was so very proud of. Emery retired as a Chief Engineer at FFV Interbake Foods but will be most remembered for his love of hunting and fishing. Years of commercial fishing and packing up the Blue Mountains with his family and friends were one of his loves along with gardening and being outside. He also loved to educate all about his LVAD heart pump that he received in 2012 to extend his life another 8 years which he wore proudly and was extremely thankful to the entire Tacoma General LVAD team.

A celebration of life will be held at a later date to be determined.