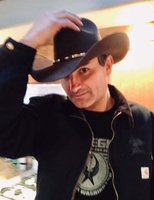 Paul was born on December 5, 1970 in Memphis, TN to Walter and Elizabeth (Moll) Hurt. The family moved to Anchorage, AK when Paul was five and a half, where his Dad was employed with the Public Health Service. He would describe it as a childhood of adventures in a far away land, from pet seals to dynamite blasts. When Walter started showing signs of illness in 1985, the family moved back to the Pacific NW, settling in Puyallup to be near the VA hospital. Paul attended Washington High School where he was a member of ROTC and lettered in track, specializing in hurdles. Paul graduated with the class of 1989, and worked for IBLP at their headquarters in Oakbrook, IL as well as two lengthy jobs for the organization in Russia. Upon his return, he was employed at Crystal Mt. Ski Resort. Paul apprenticed in carpentry with his Dad at Eagle Construction and Cabinetry from a very young age, through adolescence and into adulthood. The training carried him through life and furthered his career as a highly skilled carpenter. He was a Union Member of Carpenters Trusts of Western Washington, employed by various contractors and construction companies completing work on many major projects in the Western Washington area.

Paul and Michelle Fuchs were married for five years, during which time they lived in Tacoma and became parents to Paul Riley, born November 1, 1999.

Paul (and Riley) met Sharon the first time in July 2013 at a shared family/friend event in Leavenworth. Their paths crossed again in August 2016 when she hired Paul for some home project work. In spite of the miles and illnesses, their relationship continued to grow and strengthen, unexpected but embraced and celebrated by both of them.

In 2014, while working for the Seattle School District, Paul was diagnosed and underwent surgery for glioblastoma brain cancer. He purchased a home and moved to Nampa, ID in the fall of 2016. Paul's cancer returned, and in the midst of that battle he was stricken with West Nile Virus, which left him with long term debilitating side effects. At Paul's request, Sharon moved him back to WA in August 2018, where he sought different medical options and resumed treatment, until entering Orchard Park Health and Rehab in June of this year.

Paul had an unparalleled curiosity and zest for life. An avid outdoorsman and adventurer who dared to try just about anything at least once. Shared adventures and time spent with his son, were Paul’s most treasured memories-whether hanging out, eating out, gaming, soccer games, or the endless hours playing Frisbee and riding bikes at their second home across the street, Wright Park. He was a lover of most music genres (not much R&B) with a broad range play list from Mozart to Disturbed, and hymns to western movie themes. He was a man who could analyze, then MacGyver a fix; a wordsmith, terrific speller and a master of the English language who always listened to others with consideration. He was generous beyond boundaries, kind and outgoing in spirit, humorous with a quick wit and a knack for remembering great lines from all those movies, songs, comic routines, and South Park episodes. Paul was an unabashed instant acquaintance with anyone who took time to engage with him and trusting in mankind without question or hesitation.

Paul is also survived by:

Treasured thanks to Paul, Sharon and Riley’s loyal and unwavering support team:

As requested, a special thank you directly from Paul to Riley’s other Dad, Joseph Nichols and his side of the family for loving and helping to raise his son.

Also, a huge dept of gratitude and special thanks to Dr. Frank Senecal and Cheri Smith, ARNP, and their incredibly responsive and dedicated staff at NW Medical Specialties, Tacoma and to his kind, caring, supportive and "extended family" staff at Orchard Park Health and Rehab, Tacoma.