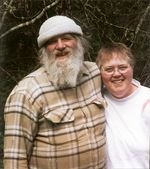 "G" 60, born 9/10/1945 in Longview, WA passed away 11/22/2005 in Gig Harbor, WA with his family. Robert grew up in Myrtle Creek, OR and on the peninsula in the Purdy area attended school at Goodman middle school and later graduated HS in Longview, WA 1963. He used to mow lawns to raise money to help the family and to buy his first car. He enjoyed hiking, fishing, building boats, and canoeing with the family mainly at Ross Lake, take rock hounding trips all over the Northwest as far as California and Arizona and collecting stamps and coins. While serving in the US Army Robert was stationed in Germany. During his time there, he took advantage of visiting the local sites by hiking, biking, and local trains. He toured Italy, France, and Switzerland as well as parts of Germany. From his travels there, he had many stories he told to his children, and grandchildren. After leaving the Army, Robert went to work for a Boat Building Company which later became Modutech Marine, Inc. in Tacoma, WA where he worked for over 30 years. During his tenure there, he traveled to Alaska and Hawaii working for the company repairing and doing warranty work. Robert met his wife Beverley Spencer at her grandfathers’ trailer court, where he was living at the time. Later they married and lived on the property near Key Center for the last 34 years. Robert is survived by his loving wife of 34 years, Beverley of Wauna, Wa; 3 daughters, Toni Heisler of Tacoma, WA, Cari (Jack) Haines of Wauna, WA, Dawn Needham of Tacoma, WA; 2 sons, Heath (Sherilynn) Garlick of Tacoma, WA, Spencer Garlick of St. Louis, MO; 2 nephews, that Robert raised after their mother’s death, David Anderson of Portland, OR, Carl Anderson of Portland, OR; 8 grandchildren; brother, Jim Garlick of Wauna, WA; and mother, Dorothy Pannel of Kelso, WA. Viewing to be held 1-5 PM Friday, Nov. 25 at Edwards Memorial Center, 3005 Bridgeport Way W., University Place, WA 98466, (253) 566-1008. Memorial Service to be held 10 AM Saturday, December 3 at Church of Jesus Christ of Latter Day Saints, Key Center Ward, 12521 134th Ave KPN, Gig Harbor. Memorial donations may be made to Franciscan Hospice, 2901 Bridgeport Way W., University Place, WA 98466. Arrangements by Edwards Memorial Center 253-566-1008