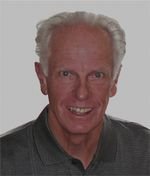 Robert Morse Curley, age 67,of Seattle and Gig Harbor, passed away peacefully on Dec. 10, 2006 after a short battle with melanoma. Born, Oct.7,1939,in Beverly Hills, he and his brother made medical history as the second largest twins born in California. Bob received engineering and MBA degrees from the University of California Berkeley and rowed for their two-time national champion crew team. Bob’s winning spirit carried over from collegiate sports to business and civic activities. He moved to Washington to pursue a career with Weyerhaeuser, and later owned and operated several successful businesses in the Seattle area, including Modern Supply and Home Innovations. Always involved in the community, he was a member of Seattle Downtown Rotary and served on many boards including Family Services, Christa Ministries, Telios Men’s Group and Seattle Pacific University. He was a long time member and Elder at University Place Presbyterian Church in Tacoma, and frequently attended University Presbyterian in Seattle. During his illness, Bob chose “faith over fear,” and his relationship with the Lord provided comfort and strength to him as well as family and friends. Bob, an avid outdoorsman, especially enjoyed traveling, tennis, biking and fishing, and shared this enthusiasm with loved ones. He is survived by Jann, his loving wife of 18years, three children Bill(Cathy), Bob Jr. (Cathy), and Kristin, two step-children Brian Taibl (Emily) and Britney Sheehan (Michael), and four grandchildren. He is also survived by his caring sister and brother-in-law, who raised him from a young age, Gerry and Maclyn Somers, as well as numerous nieces and nephews. A memorial celebration will be held at University Presbyterian Church, 4540 15th Ave. N.E., in Seattle at 1:00 p.m., on Monday, Dec. 18, 2006. In lieu of flowers, contributions can be made to Rotary Boys and Girls Club, 201 19th Ave., Seattle, WA 98122.