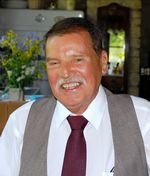 Herman Don Hartzog "Bud" was born in Morton, Texas on February 19th, 1942.He passed away on May 20th 2007 at the age of 65 in Tacoma, Washington at 9:45 pm of liver cancer. Please click on the link below to watch video tribute: http://videos.lifetributes.com/?id=9171 "Bud" was the 2nd child of 7 born to Lucille McLish and Clarence Clark-Hartzog. He is survived by a wife, Royanne Cooley Westbrook Hartzog, 3 children, a daughter, Sandy (husband Mike Schrotenboer), 2 sons, Rick, and Terry Hartzog, and 4 grandchildren. Brothers: James (Lorena), Robert (Joann), Michael Hartzog; Sisters: Barbara Hallauer, Sharon (Monte) Ough, Brenda (Bill)Hooper; and numerous nieces, nephews, and cousins. Bud was a member of the Chickasaw Indian Nation. Bud received his Associates of Arts and Science and needed only a few more credits to receive his Bachelors Degree. He was a licensed barber, and had a welders certification. He was an extremely multi-talented person, and a precision craftsperson who enjoyed working with wood, working with leather, jewerly and beadwork. The last 9 months Bud experienced a different kind of living with Jim and Lorena at their nursery. Although he was a hard worker, landscaping proved to be a bit challenging. He had the opportunity to see first hand how to move a 18 to 20 year old plant with his brother Jim by his side. The "store" was something Lorena learned was different from what she was used to. They had a goodwill trailer next door and every evening Bud would come home with all kinds of goodies that he would fix, then either use or give away. (He had already found out that they only accept clothing and everthing else went to the dump in the morning). As he was growing up, the family often visited the "store" for all kinds of treasures. He had the opportunity to relive the treasure hunting again. What he did not want, ended up in 3 large truck loads going back to the "store". It was suggested that he open a second hand "store" with all the treasures he found. He could fix and make just about anything work He was a perfectionist at everything he did. He did have a heart of compasion and was willing to help in whatever way he could. Lorena has surgery on her foot in September and wanted to go to church. She could drive once she got to the car, but needed help getting there, so Bud attended church for 4 months. He loved to eat, so there was no problem with him going to the pastors home for a couple of pot dinners, which he talked about for weeks. Bud not only heard the salvation message, he knew he had a second chance, several times. On May 4, 2007 at 12:45 pm, Pastor Mark visited Bud in the hospital. Mark asked Bud if he wanted his name was written in the Lamb's Book of Life. Bud said yes. So rejoice, we will see him again. Even though Bud had more than his share of obstacles and trials in his life he was still able to press through and give out of the good nature that was inside of him and us all. He was never bitter and never said (why me) during all of his life’s trials, he learned to thank God for the understanding that he was given the choice to choose. One of Bud's lifelong dreams came true when he was able to fly and drive thru the state of Oklahoma, to go to his niece's wedding on April 20th, just a month from his passing. His parents always talked about Oklahoma and he was able to experience it first hand. Spoken by Bud, "I've always wanted to visit Oklahoma, don't know if I will ever get back to drive thru and see all those places ma and pa talked about." Bud had a heart to give to and help people. Bud, we will miss your distinctive laughter and merry wit. Arrangements by Edwards Memorial Center 253-566-1008